As speculated by the News Agency of Nigeria the IndependentNational Electoral commission (INEC) has lifted the ban on political campaigns. Campaigns now close at 12 midnight, Thursday 21st February 2019.
National Commissioner chairing the committee on the information and Voter Education, Mr. Festus Okoye, signed the statement lifting the ban. 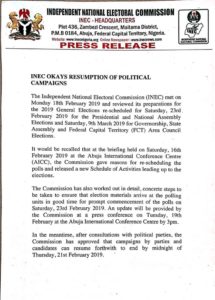 NAN first reported that INEC boss, Mahmood Yakubu hinted at the measure at a meeting with observers.
Yakubu gave the indication at a meeting with an Observation team from the African Union, led by former Ethiopian Prime Minister Hallemariam Desalegn in Abuja today.
Professor Yakubu at a meeting with stakeholders on Saturday had overruled fresh campaigns following the postponement of the Presidential and National Assembly election on Saturday 16 February till 23 February.
The two major political parties, the All Progressives Congress and the Peoples Democratic Party have criticised the administrative ban and vowed to campaign before the new date for the election.
In the statement, INEC said: “Media organisations are at liberty to accept, publish, broadcast and circulate campaign materials up till midnight of Thursday 21st February 2019. Political Parties and their candidates are enjoined to abide by the extant laws governing campaigns.
“The Commission wishes to thank all Nigerians for thetr understanding regarding the rescheduling of the elections. We appeal to stakeholders to be dispassionate and circumspect In their comments. The Commission is focusing on the elections to be held on 23th February and 9th March to ensure that they are free, fair and credible.
“We urge all Nigerians to participate fully in the elections, notwithstanding the disappointment.”