Vice President Yemi Osinbajo is safe after the helicopter he was in crash-landed in Kabba, Kogi State..
“VP Osinbajo’s Chopper crash lands in Kabba, but he and the entire crew safe. He is continuing with his engagements and plans for the day in Kogi State,” his spokesman, Mr. Laolu Akande said via Twitter. 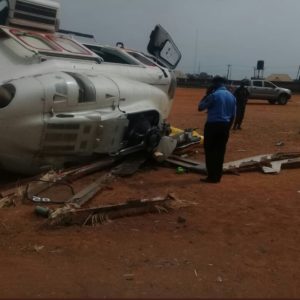 In another statement he issued shortly after, he said: “Vice President Yemi Osinbajo, SAN, has arrived Kabba, Kogi State today. His Chopper had crash landed after a landing incident, but everyone is safe.
“Prof. Osinbajo is now in Kabba after the incident and continuing his engagements in the State, engaging the people on the Next Level plan of the Buhari administration.”