Bill Clinton visits as Buhari, Atiku, others sign peace accord

Former American President, Bill Clinton, will deliver a keynote address and witness the signing of a National Peace Accord, three days to the Presidential and National Assembly elections, a notice from the General Abdulsalaam Abubakar led National Peace Committee has indicated.
He is also to meet with Presiden tMuhammadu Buhari and presidential candidate of the Peoples Democratic Party (PDP), former Vice President.

In a statement, the Head of the Committee’s Secretariat, Fr. Atta Barkindo said: “The National Peace Committee, mindful of the importance of peaceful elections and non-violent transfer of power has engaged various stakeholders in preparation for the 2019 General Elections.
“To this end, it is pleased to announce that it has invited Bill Clinton, 42nd President of the United States of America and Baroness Patricia Scotland, Secretary General of the Commonwealth, to visit Nigeria from 12 to 13 February 2019 ahead of the Nigerian presidential elections.
“Both President Clinton and Baroness Scotland will deliver goodwill messages at the signing ceremony of the “National Peace Accord”, which will hold at Abuja International Conference Centre on 13 February. President Clinton would also hold meetings with President Muhammadu Buhari and former Vice-President of Nigeria, 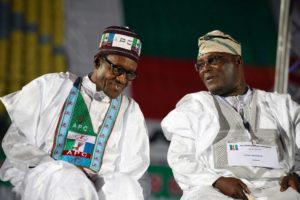 Atiku Abubakar.  As we move into Nigeria’s national elections, the threat of unrest has to be taken seriously.

“Both Guests of Honour enjoy enormous respect in Nigeria and beyond and we look forward to his counsel and advice to help Nigeria navigate through what will hopefully be a peaceful and fair electoral cycle.
“The National Peace Committee is grateful to the Kofi Annan Foundation for supporting this process, and, after 2015, again supporting free and fair elections in Nigeria.
“The NPC has engaged the Independent National Electoral Commission (INEC), security services, 91 registered parties, the media and civil society organisations. Considering some of the challenges faced, the Committee organized the 1st signing of the National Peace Accord on 11th December, 2018 to support peaceful campaigns and political rallies.
“Following from this, the Committee, led by former Nigerian Head of State General Abdulsalami Abubakar, has organized the 2nd signing of the National Peace Accord which would be held on:
Date: Wednesday 13th February, 2019
Time: 10 am
Venue: Abuja International Conference Centre
“This signing is aimed towards committing stakeholders to accepting the outcome of the vote, as long as it is announced by INEC, the body empowered by law and is adjudged to be free, fair and credible.”