Buhari, Atiku in show of strength in Adamawa, Katsina

It was a test of strength in opposite directions as President Muhammadu Buhari took his political campaigns to Adamawa; and Peoples Democratic Party (PDP) presidential candidate, Atiku Abubakar, stopping over in Buhari’s home state of Katsina.
Both men commanded mammoth crowds of their own, but it was a sad tale in Taraba campaigns of Buhari where three persons died in a stampede that left many injured. 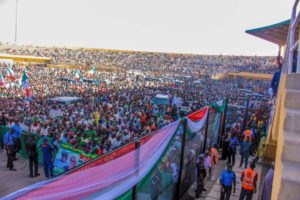 President Muhammadu Buhari expressed profound sadness over of loss of lives at the All Progressives Congress, APC Presidential Campaign Rally in Jalingo, Taraba State on Thursday, a statement by his spokesman, Garba Shehu said.
Reacting to reports of the tragic death of some APC supporters due to the overwhelming crowd at the Jolly Nyame Stadium, the President said:
“I always feel very sad and distressed when ordinary Nigerians who love me and our party because of what we stand for and have done, make personal sacrifices by taking the pains to show their support, end their lives tragically.”
While appreciating the massive support he is receiving all over the country, President Buhari calls for restraint on the part of his supporters to avoid such tragic incidences, and improved crowd management at rally grounds.
“I want them to stay alive and witness the dividends of purposeful governance that the APC administration will unfold when they renew our mandate,” he said.
Commiserating with the families of the victims and the APC family, the President prays Almighty God to grant peace to the souls of the departed and speedy recovery to the injured.
Atiku joined also in sympathizing with those in Jalingo . He condoled with the families and friends of those who may have lost a dear one in the tragic incident at the APC presidential rally in Jalingo, Taraba State on Thursday.
A statement signed by his Media, Adviser, Paul Ibe, quoted the PDP Presidential candidate to have expressed sadness over the loss of lives.
“All Nigerian lives matter whether they are of the APC, PDP or any other party”, Atiku Abubakar was quoted to have said from Katsina where he was holding a rally himself.
Atiku also expresses his deepest condolences to the APC and its presidential candidate and the Government and people of Taraba State over the tragedy.
The PDP Presidential candidate prays for strength and comfort for the affected families and for God to grant the deceased eternal rest.
It is not exactly what led to the deaths but the Taraba State government has its own version.
In a statement read at a news briefing by Bala Dan Abu, Senior Special Assistant on Media and Publicity to the Governor on Thursday February 7, 2019, the government said: “As you are already aware, today’s Presidential campaign flag-off of the All Progressives Congress in Jalingo, Taraba State, ended on a tragic note. Thugs hired by the APC leaders in the state turned the event into an opportunity to launch violent attacks on members and supporters of the People’s Democratic Party, PDP. In the process, several lives were lost.
“Governor Darius Dickson Ishaku’s convoy was also attacked on its way out of the airport where the Governor, his Deputy, Engineer Haruna Manu and other senior members of government had gone to see off President Muhammadu Buhari at the end of the Presidential visit. The Deputy Governor’s car and several other cars in the convoy including that of the State Commissioner of Police and a Special Adviser to the Governor, were damaged.
“The thugs, most of who were imported from neighbouring states to create the false impression that APC enjoys a large following in the state, came heavily armed. They carried guns, cutlasses and sticks which they displayed openly and in the full glare of security agencies who merely looked the other way.
“On the eve of President Buhari’s visit, thugs hired by the APC leadership in the state had gone round Jalingo metropolis and its environs and destroyed PDP posters and bill boards. They were given cover by security agencies who fired gunshots to scare away those that may dare to confront them.
“What happened today is a big contrast with the PDP presidential flag-off of February 5, 2019, in Jalingo, which attracted a larger crowd but recorded no incidence of crisis and deaths.
“The Taraba State Government hereby condemns this unfortunate bloodletting that has become the character of the APC in Taraba State. Residents of Wukari are still leaking the wounds of the APC violent visitation of January 29, 2019 during which PDP posters and billboards were torn and a member of the PDP was killed.
“The State Government will no longer fold its arms while innocent people are being killed and maimed by the APC.”