Ado Ibrahim @ 90: Still a humanist, royal icon for all seasons

By Sufuyan Ojeifo and Emmah Adah
“The ways of the spirit offer something that does not lend itself to be domesticated or controlled, or quantified. They call us to a journey of wonder and also to a journey of responsibility in which we are expected to continue to ask the hard questions and to probe.”
This compelling, non-mechanistic insight into humanity’s troubling journey by Dr. Samuel Sullivan of the Andova Newton Theological School, Massachusetts, perhaps provides the best prism from which to attempt a deconstruction of the Ohinoyi Ebira, HRM Dr. Ado Abdulrahman Ibrahim, CON, FNMGS, FNSME, DSc, LLD, who turns 90 today – as well as attempt a fitting tribute.
An incisive thinker, in him, social science, philanthropy and tradition intersect to serve both humanity and culture. Something of a lion in winter, at the golden age of 90, HRM Ado Ibrahim remains an informed cultural anchor and messenger for his people in a period of rapid change; adroitly spearheading the renewal and
modernization of Ebiraland. Pushing a progressive vision for the Nigerian state, he tenaciously continues to espouse tradition and culture as still relevant tools for building a just society.
At the level of small talk, you could hardly get the better ofthe venerable Ohinoyi Ebira. But for a social scientist who is more at home with analysis and action, this trend of dialogue could pall easily with the witty top traditional ruler. His earthiness and folksy charm easily disarm and readily sucks you into his growing army of admirers. What is the story behind the man who swapped his towering business trajectory for the magnificent AZAD Palace and has certainly proved that business, economics, philanthropy and culture fundamentally address human development?
Close up, the vibration of energy Dr Ado Ibrahim emits is reminiscent of that from an active volcano. In a sense, he is one. But this dimension could only fairly be applied to his intensity of focus and depth of concern for his kingdom and country.
Every important life mission needs specific preparation. For the Ohinoyi Ebira, this was an imperative. What’s more – to reign over the swashbuckling Ebira people who are republican by nature, outspoken and very hard working, a king must be up to the scratch.
Born on 7th February, 1929, Dr Ado Ibrahim attended a nursery and Quranic School and later finished his primary education from NA School in Okene, Kogi State, in 1940. Going forward, he later went to Ondo Boys high School and Oduduwa College, rounding off his secondary education in 1949. He obtained a B.Sc in Economics from London School of Economics in 1954 and an MBA from Harvard business School in 1959.
He assumed the office of Ohinoyi of Ebiraland on the 2ndof June 1997, after the passing away of the former Ohinoyi, Alhaji Sani Omolori who ruled for 40 years and 40 days as Ohinoyi of Ebiraland.
His enthronement as the Ohinoyi of Ebiraland was a grand occasion, attended by thousands of Ebiras and international diplomats and was broadcast on major Nigerian Television stations for days. He rules Ebiraland from his magnificent pavilion, AZAD Palace named after his son. The palace is rated as one of the most beautiful palaces in West Africa. 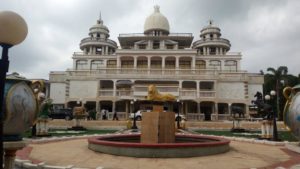 Mohammed Ataba Sani-Omolori, the Ciroma of Ebiraland and Clerk to the National Assembly, in an informal discussion about the royalty of Ebiraland, spoke glowingly about how Dr Ado Ibrahim has competently provided leadership to the people.  He would then proceed to fittingly capture the essence of the Ohinoyi of Ebiraland in his personal tribute to the royal father on his 90th birthday.
His words: “I am proud to note that your illustrious life has indeed, been very eventful. It can be remembered, with vivid recollection, your vast business empire, which provided employment opportunities to several thousands of people. Your philanthropy in terms of scholarships to many indigent students, contribution to building of schools, mosques and other worthier causes, are equally well documented. In these areas, you remain a role model, mentor and source of inspiration to several generations of Nigerians.”
More, the respected NASS Clerk, from his privileged position further shares an insight pretty few Nigerians know about Dr. Ado Ibrahim: “Permit me to also place on record that since assuming Office on 2nd June, 1997 as Ohinoyi of Ebiraland, Your Majesty has proved to be a veritable bridge-builder and peacemaker. In several private conversations between us, you have lightly dismissed the acrimonious exchanges between the contending parties in the overall political contestations of our land. Even when the Supreme Court in August 2015 affirmed your appointment as the Paramount traditional ruler of Ebira people, you chose to remain magnanimous in victory. You have worked assiduously to reconcile and unify your subjects.
“At 90, Your Majesty still represents a shining example of a sound mind in a sound body. This is one secret that you owe us, your admirers. Besides, Your Majesty has continued to enjoy the friendship of the rich and powerful as well as the weak and the poor. This also is a puzzle to many of us. May Ohinoyi’s reign be very long and peaceful. Happy birthday, Your Royal Majesty.”
Today, the Ohinoyi of Ebiraland who enters the special 4.7% age bracket of the world’s over 90, pushes a vision for Ebira, which identifies the most singular challenge as the need to reverse the decline and restore the foundations for development and growth in this great and historic land. He believes that Ebira must be restored to its past supremacy by keeping abreast of change while upholding and preserving its identity as a people. He also believes that Ebiraland must be part of the mainstream in Nigeria and should maintain and strengthen its ties and links with the world around it.
Today, Ebiraland faces the challenges of enhancement of its culture and tradition, community development and self-help, re-focussing the youths towards functional education and gainful economic activities, and generally harnessing its resources and energy at home and in the Diaspora for the good of Ebira. Addressing these issues and challenges calls for a leader who possesses a unique combination of attributes, which incidentally, HRM Dr Ado Ibrahim has aplenty.
HRM Dr. Ado Ibrahim is gentle but firm, resolute and fair. He does not shirk responsibility for his own actions and those of his delegated subordinates. He is blessed with excellent managerial skills as well as local, national and international exposure and connections. He is a man of principles and he is open, transparent and diplomatic. Above all, he is well versed in and committed, as bridge builder, to upholding the ancient customs and traditions of the proud people of Ebiraland in the praxis of the modern 21stCentury. Happy birthday, Your Royal Majesty!
▪ Messr. Ojeifo and Adah are Editor-in-Chief and Deputy Editor-in-Chief respectively of The Congresswatch Magazine

Chilling: Those who intervene in Nigeria will go back in body bags – el Rufai