Copyright 2021 - All Right Reserved
Home Features (Opinion) If Dino is a dramatist, who sets the stage for him?
Features

(Opinion) If Dino is a dramatist, who sets the stage for him?

By Frank Tietie
As a matter of fact, I believe the prosecutorial authorities, especially the Nigeria Police could have done far better in handling the arrest and prosecution of Senator Dino Melaye for the alleged crime of conspiracy to murder a policeman.
Each time, it appears a stage is being set up for the peculiar senator to act up a scene.
So nobody knew that Dino had been invited by the police since July 2018, until Dino cried out in December 2018 that the police planned to kill him.
Dino, for me, received a poor legal advice not to immediately respond to the police invitation, in whatever way and means possible, even if it meant to challenge it in court. Waiting till about six months after the invitation was staging a set for a drama and the police ought to have known better
Thus, how could the police be so silent on the invitation to the ebullient and boisterous Senator Melaye? 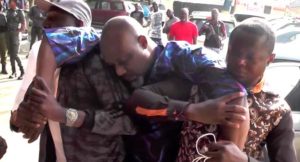 Melaye being helped to walk by policemen when he surrendered himself

The Nigeria Police, I can say currently has a very strong media team who by now are quite familiar with the said natural antics of Senator Melaye. The police ought to have built up the case for the arrest of Dino by announcing its invitation to him and taking the public through the steps it intends to take or would be taking to bring the senator to justice. But the police, for months abandoned its invitation to the senator and only appeared to decide to move against him when he was perceived by a section of the public to have committed some political sins against the ruling party and the President. That perception is a serious detraction from the police actions which began from the siege on the senator’s house.
Dino, in pictures splashed on the social media, is seen sleeping on the ground, in an open compound, attracting pity and depicting a brutal criminal justice system. So who set the stage, if Dino is at it again? Did he need to be forcefully taken away from the police hospital without the knowledge of the public?
Again, the police failed to build up an unassailable case for the movement of Dino from the hospital, even if it was against his will. The police ought to have carried the public along with the various applications under the Administration of Criminal Justice Act, leading to confirmation of the health of the accused senator and ultimately by order of court removing him for trial. But the police quietly obtained an order to remand him and also moved him from the hospital to the surprise of the public. 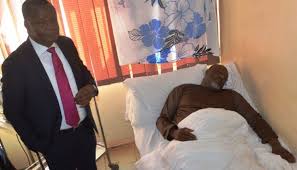 Dino on his hospital bed

Transparency and compliance to legal standards are the government’s best means of winning what it perceives as a media onslaught of dramatic shows which depict it in bad light in the eyes of the international community.
In Nigeria, government often forgets that the people are the ultimate in the state. It is the people, to whom all authorities are answerable according to the constitution.
Despite having a people so weak, ignorant, hungry and divided in Nigeria, they must not lose sight of their place in the Nigerian state or else, their bondage will continue. They must rise up and be united only by the things common to them and not by how different they are from one another.
Suffering, pain, and insecurity are common to everyone. The desire for freedom, liberty and all that makes for a good life are a common aspiration for most Nigerians. These values and verities should unite the people and make them so strong that the authorities will always respect their will and place in the state.
On a personal note, the other day, I said Dino abandoned me and CASER during the build up to 2018 Human Rights Fiesta. Many thought I will abandon him now that he is going through a turbulent time. That cannot be true of my person. I was later to be on Seun Okinbaloye’s Politics Today on Channels Television to staunchly defend Dino after he surrendered to the police. I attempted to justify his fears in the hands of the Nigerian police and called for greater respect for his fundamental human rights.
Thereafter, my appearance on Channels Television, a concerned individual calls up my brother and asks: “…What’s the business of an Urhobo man defending a Kogi Senator?”
Like Jesus Christ once answered to a question concerning who constituted His relations; My origins may be from the great Urhobo lands of Ughelli and Agbarho in Delta State but my brothers and sisters are all those who are oppressed, who desire freedom, liberty, truth and justice. They deserve the good life and better treatment at all times according to law.
I am a human rights defender. I will stand up for anyone and for every one, no matter the tribe, race, religion, opinion, lifestyle or political affiliations. I love anything human like the Creator loves me and everyine and has given us all things freely and to freely enjoy.
Therefore, I will stand up for the APC member and the PDP member. I will speak up and defend their rights to the best of my ability.
Like my faith in the Holy Bible, I believe that life will be better for all of us and that Nigeria will be preserved if we indeed place human rights first. 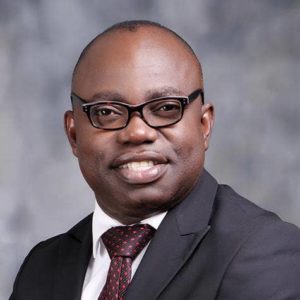 ▪Tietie, a lawyer, is the Executive Director, Citizens Advocacy for Social & Economic Rights (CASER), and sent this from Abuja.