A mammoth crowd was on hand in Bauchi to grace the campaign of sitting President and presidential candidate of the All Progressives Congress (APC), Muhammadu Buhari.
The crowd is a record one since the Independent National Electoral Commission (INEC) blew the whistle for campaigns to begin. 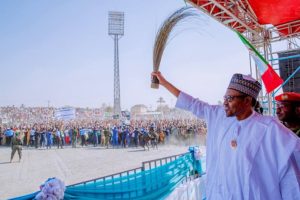 Buhari waving a broom at rally in Bauchi

A former national chairman of the Peoples Democratic Party (PDP) and former Governor of Bauchi State, Adamu Muazu, among other prominent sons of the State, who jumped ship to the ruling APC were showcased at the rally.
In Jos, Plateau State, there was a surprise of sorts as a member of the APC Board of Trustees (BoT), Yahaya Kwande, was at the campaign of rally of the PDP Presidential candidate, Alhaji Atiku Abubakar. 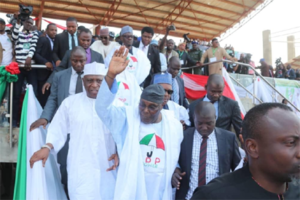 Yahaya Kwande on the left of Atiku in Jos 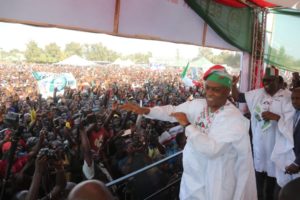 In Jos, Atiku had his own record crowd, where residents and Internally Displaced Persons (IDPs) trooped out to receive him.
In Abuja, the Peoples Trust (PT) had its own crowd where its candidate, Gbenga Olawepo-Hashim, promised to end security challenges and joblessness, with another promise to provide jobs at a minimum wage of N50,000 Minimum wage.
Olawepo-Hashim, addressed the crowd at the Old Parade Ground, venue of the rally, said that the current administration had worsened the security situation of the country, adding that 11 out of 19 Northern states are already groaning under the scourge of insecurity.
National Chairman of the PT, Mr. Olisa Agbakoba (SAN), who declared the rally opened, said that the progressive forces in the country have resolved to deliver the presidential candidate of the party, Olawepo-Hashim at the February 16, 2019 polls.
Agbakoba, told the gathering that the progressives have decided to rally against the present set of leaders the same  way they rallied against the military  during the battle to regain democracy.
Agbakoba, who spoke briefly to declare the campaign open said that the progressive forces were united under the umbrella of the PT.
“We took a resolute decision to form this Movement we are seeing today. We have reunited under a broad platform called Third Force and by God’s grace and power, we will win. Let us go together,” Agbakoba charged.
According to him, in the years past, progressive forces including Chief Gani Fawehinmi, himself, Femi Falana among other progressives resolutely fought the military to a standstill, adding that today, the same progressives, who are alive have resolved to change the current order by delivering Olawepo-Hashim as President.
Olawepo-Hashim, who addressed the crowd said that Nigeria is presently at the cross roads with existential challenges. 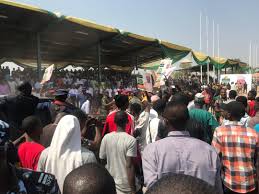 He said: “This is a turning point in the history of Nigeria. We are at a point where we will exchange instability for security. We are at a point where we will dump poverty for prosperity, we are at a point where we will stop the wave of violence and hatred and build a truly united Nigeria; where the live of every Nigerian will count.
“Today, 11 out of 19 States of Northern Nigeria have literarily been overrun by bandits from across the border and violence caused by agents of disunity and destruction.
“The southern states have literarily been overtaken by kidnappers, robbers and all sorts of violence induced by the present state of the economy of the country.
“At the bottom of these massive upheavals in the land is youth unemployment, which has climbed to about 33 to 36 percent. Now we have more youths that are unemployed than youths that are gainfully employed. The national unemployment average has also climbed to 24 percent of the population.
“Our resolve is to build a new economy that will guarantee jobs for our teeming youths, empower our women with the capital to take their place in the society and not just in the ‘ozza’ room.
“We are resolved to expand our economy to a $4trn economy within 10 years. We will restructure the way power is organisedbetween the states and the federal government by devolving power to the states as presently constituted so that they can mobilise more local resources to address problems.
“We will empower the states to have their own police side-by-side with the federal police, so that the internal security can be enhanced. We will create a national guard as an intermediate force between the Army and the Police so that we can restore internal security rapidly to the country.
“We will build a Nigeria where every Nigerian will be proud of his own passport because of our initiatives on foreign policies. We will create an environment where more youths will have access to education by increasing budgetary allocation to the educational sector. We will make the necessary social investments to take our people rapidly out of poverty.
“We are a party that is determined to build a better Nigeria. We want to put an end to the poverty squalor and underdevelopment that have been the hallmark of the incumbent government. We will fight corruption in a way that it would be done scientifically. It will be multi-various. It is not just going to be a police action.
“You cannot fight corruption when majority of the people are hungry. A people that pay his worker paltry minimum wage below N18, 000 cannot fight corruption efficiently. We will raise the minimum wage to N50, 000 at the first anniversary of our government.
“Nigeria has got the resources, both human and material to build a prosperous economy. Nigerians have no relationship with poverty with the amount of resources that God has bestowed this country with. Come with us in the Peoples’ Trust. You can trust us because we are people who have fought before for the country”.

It is not true our DG left us for you, PDP tells Buhari