Following the reception accorded Ogun State Governor Ibikunle Amosun and the governorship candidate of Allied Peoples Movement (APM) in the state, Adekunle Akinlade, on Sunday by President Muhammadu Buhari, and eyebrows raised in certain quarters, the presidency has explained that its principal will campaign for All Progressives Congress (APC) candidates in the coming election but also embrace endorsements from candidates of other parties.
Amosun’s former aide and federal lawmaker, Akinlade, left APC for APM to pick its ticket in the gubernatorial elections after a disagreement between APC’s leadership and the Ogun State Governor led to the emergence of another candidate, Mr. Dapo Abiodun.
Eight days ago, former Ogun governor, Chief Segun Osoba, led the APC candidate, Abiodun, to Buhari where he (Abiodun) received the President’s endorsement. 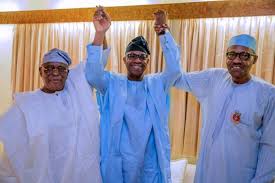 There has been disquiet since this Sunday’s visit by Amosun and Akinlade, but Presidential spokesman, Mallam Shehu Garba,, said that Buhari as a party leader and a candidate on the platform of the APC in the coming elections, the President will campaign for the party and all its candidates.
He adds: “This however does not mean that he, as the nation’s leader, will decline courtesy calls or offers of support from citizens including candidates flying the flags of other parties.
“There is no doubt that the President has no competition here in terms of popularity in the coming elections. But the more support he gets, the wider the margin of victory there will be.
“So please let there be no confusion about this. President Buhari is APC.
“He will campaign for all APC candidates, but he welcomes support and endorsements.”