Daily Trust offices in Abuja, Maiduguri shut down, reporters picked by soldiers
The Daily Trust newspapers has confirmed the shutting down of its offices in Abuja and Maiduguri, Borno State, ostensibly over a report in its Sunday edition detailing troops’ movement and plans against insurgent group, Boko Haram in Borno State.
A Channels Television report monitored in Abuja quoted the Chief Executive Officer (CEO) and Editor-in-Chief of the paper, Mannir Dan-Ali, on the travails of the company.
“Around four o’clock, I got a call from our Maiduguri office where I was informed that soldiers and some plain-clothes security officials had surrounded our regional office and forced their way in and after spending about 20 minutes, they now went away with two of our reporters (the Bureau Chief Mr Uthman Abubakar and a reporter, Mr Ibrahim Sawab.
“An hour or so, thereafter, I also got another 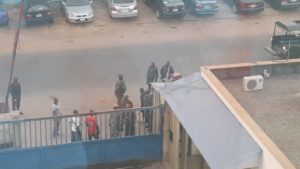 call because I happened to be outside Abuja, driving back into Abuja. So, I got another call saying that soldiers had come to our head office and that they’ve forced themselves into the premises. And eventually they asked everyone to leave the premises and then they confiscated some computers from our editorial department where tomorrow’s paper is being prepared.
“Obviously, the aim is to prevent the Daily Trust from being on the street tomorrow.
“Now I’m actually close to the office. I’ve gone to the gate, I’ve seen the soldiers who are manning the gate and they have shut down our five floors and all the lights are off and that’s the situation as I speak to you now,” Dan-Ali said.

ISWAP recruiting youths
A community leader in northern Borno who does not want his name mentioned, said the insurgents were recruiting young people.
“They are seriously working on the psychology of our people,” he said.
“They no longer kill our people, especially the youths, instead, they show them they are better in terms of taking care of them, and to me this is very dangerous.
“Of course, they collect taxes from sales of produce and fish but they no longer forcefully collect the goods and with this approach, they are getting some sort of sympathies, tactically winning the love of our children,” he said.

“The terrorists have the advantage of knowledge of the environment and they can go to Cameroon, Chad, or Niger if the heat becomes unbearable for them, hence the need for serious cooperation between all the countries in the area of operation to stop the menace,” he added.
The forces behind ISWAP
In August, 2016, ISIS leader Abu Bakr Al-Baghdadi put to an end, the seven years of Abubakar Shekau’s leadership in Nigeria and the West African Province.
In his stead, he anointed Abu Mus’ab Al-Barnawi, whose real name is Habib. He is the son of the late Mohammed Yusuf, the founder of Boko Haram.
The Boko Haram under Shekau had earlier in March, 2015 paid allegiance to ISIS’s proclaimed caliphate under Al-Baghdadi.
When he was removed as leader, Shekau on August 4, 2016, released an audio in which he described the breakaway leader, Al Barnawi as heretic. Soon after the new development, sporadic fighting broke out between the two factions, one headed by Shekau and the other by Al-Barnawi who has the support of Mamman Nur.
Findings by our reporter at the time revealed that while the ISIS-backed Al-Barnawi had an upper hand in northern part of Borno State, Shekau remained dominant in the central and southern parts of the state, where the large swathe of the Sambisa forest is located.
With the support of Mamman Nur, Albarnawi achieved a lot in consolidating his gains in northern Borno by trailing and killing “Shekau’s boys” in places like Monguno, Kukawa, Damasak, Abadam, Marte and Kala-Balge.
On the other hand, Shekau remained “strong” in villages in Gwoza, Damboa and Chibok, which are all not far from the Sambisa forest.
Mamman had been on the wanted list of the United States with ransom placed on his head.
Nur was killed around August, 2018, by forces close to Al Barnawi over alleged “selfish” handling of millions of money in hard currencies allegedly given to him as ransom for the release of captives.
Before his death, Nur was seen as ISIS linkman in Nigeria, but fronting Al-Barnawi as leader, in order to retain the loyalty of the original supporters of Mohammed Yusuf.
With Nur’s death, the Albarnawi faction became more vicious in attacking military formations and ambitious in capturing more communities.
Beyond northern Borno, Al Barnawi’s fighters are now inching towards central and southern part of Borno, launching attacks in places like Mainok, Jakana and other locations along Maiduguri-Damaturu road.

Why we sealed Daily Trust offices, by Army