Amidst machinations, Ekweremadu says no division in South-East PDP

The Deputy President of the Senate, Senator Ike Ekweremadu, who is speculated to be aggrieved and sulking for been passed over for vice presidential candidate to Atiku Abubakar has described as fake news stories purporting divisions in the Peoples Democratic Party ahead of the 2019 presidential election.
There have been talks of cold shoulder from Ekweremadu following the choice of Peter Boo, and the manner Atiku announced his choice and flew to Dubai without consultations with PDP stakeholders in the South-East geo-political zone.
Other sources said Atiku may have made an initial offer to the DSP, “but he was not too comfortable with it because it was too early in the day; thought it should go to the South-West to give PDP a chance there; and factored that he would be better positioned as Senate President and head of the Legislature.” Unfortunately, Dr. Bukola Saraki is said to be eyeing the number three spot and weighed in for Obi, it was gathered. “As it is, those who stayed back to keep the PDP together have been sidelined and licking their wounds while those who abandoned the party and returned are on a roller-coaster ride. Curiously, the man who was betrayed in 2015, Dr. Goodluck Jonathan, is speculated to be at the centre of mending fences,” one knowledgeable source said.
Jonathan has been mentioned in efforts to rein in Governor David Umahi, allegedly a sore opponent of the Atiku/Obi ticket. The name of another former President, Chief Olusegun Obasanjo, has been thrown up as a behind-the-scene peace negotiator in the troubled South-East zone. 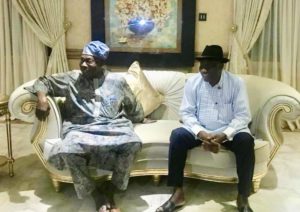 Nonetheless, Ekweremadu described the reports as “cheap blackmail, smear campaign, and extreme propaganda” and urged party faithful and supporters not to be distracted by the lie mills as the nation approached the critical stages of the 2019 elections, but to remain focused on delivering the votes to ensure the success of the PDP.
The Senator, who took to his social media handles @iamekweremadu, to make the explanations, said: “My attention has been drawn to the orchestrated attempts by some characters to create the impression of a divided house in Peoples Democratic Party, PDP, in the coming presidential election. Such characters dish out fake and divisive stories without source on a daily basis and attribute same to me.
“While I refuse to be distracted by such cheap blackmail, smear campaign, and extreme propaganda, it is important to reassure our supporters that the PDP is united and focused on wresting power from the All Progressives Congress, APC.
“After the PDP lost the presidency and majority status at the National Assembly in 2015, I made it clear that I would stand by the party, no matter what. It took other party stakeholders and I a lot of efforts, sacrifices, soul-searching, and painstaking negotiations to hold the party together and rebuild it. If I did not abandon the PDP at its darkest hour, it does not make the slightest sense to say that I abandoned it now that its sun is rising again.
“Meanwhile, I have held separate meetings with our Vice Presidential candidate, Peter Obi and the Chairman, South East Governors Forum, Dave Umahi, to work out strategies for the success of our party and candidates in the coming elections. We are also setting up a meeting of South East PDP stakeholders by weekend to continue to strategise on the coming elections.
“I have no doubt that the South East leaders will deliver the region overwhelmingly to the PDP and I expect that other leaders will also do the same in their respective geopolitical zones”.

Three dead, many injured as articulated vehicle crashes into merrymakers on Sunday night