The national leadership of the Peoples Democratic Party (PDP) and the PDP Presidential Campaign Organization (PPCO) has lamented the death of its members and other Nigerians in a ghastly motor accident in Benue state.
At least seven members of PDP and others died, while several were injured in multiple car crashes on the way to Agatu for the launch of the campaigns of former Minister of Interior, Abba Moro, the PDP senatorial candidate for Benue South district. 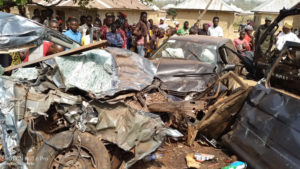 The launch has been postponed indefinitely.
The party bemoaned the painful death of the members and described them as heroes of democracy, who paid the supreme price in the course of their commitment towards rescuing the country.
The PDP leadership is particularly pained that these party faithful died on their way to the flag-off of the PDP Benue South Senatorial campaign, in their quest to ensure an acceptable, people-oriented representation of their zone in the Senate.
The PDP commends Governor Samuel Ortom, other leaders and members of the party in Benue state for their interventions and charged members from other states to join in extending their hands of fellowship towards the bereaved and the wounded at this critical time.
The party also called on members to ensure that the deceased did not die in vain by remaining united in working harder, now, more than ever before, to ensure the party’s victory in all elections in the state.
In its statement, the All Progressives Congress (APC) condoled with the Peoples Democratic Party (PDP) over the death of some of its members who died following a fatal accident on Otukpo-Agatu Road in Benue State while travelling for the campaign flag-off of a Senatorial candidate on Friday.
The statement adds: The APC is anguished and deeply saddened by the tragic accident. While we share the pains of the bereaved families, we also pray that those injured in the accident make a speedy and full recovery.
“As we mourn, the Party prays that the Almighty God give the bereaved families and other loved ones the strength to withstand the tragic loss and also grant the dead eternal rest.
“Political activities have expectedly heightened in the leadup to the 2019 General Elections. The APC urges all to ensure safety as we go about our respective campaign activities. We also call on relevant agencies charged with keeping transport routes and campaign grounds safe to ensure that the electioneering campaigns are as humanly possible devoid of avoidable accidents and incidents.