2019 election is a referendum on insecurity, killings & hunger – Dogara

… says APC led government has failed the North East
The Speaker of the House of Representatives, Hon. Yakubu Dogara has declared that the 2019 elections would be a referendum on the state of security and hunger in Nigeria.
Dogara who was speaking in Gombe, Gombe state capital at the North East zonal campaign and rally of the People’s Democratic Party (PDP) challenged Nigerians to do a introspection and decide if they have made progress in the last three and half years or have witnessed a decline in their living standards on a general basis.
While lamenting the current state of situations in the country, Dogara remarked that, “So 2019 elections is about insecurity, whether we can be secured. Then look at your own lives, even if nobody loves or likes you, advise yourself, hold a consultation with yourself, sit down and argue with yourself, ask yourself what progress you’ve made in the last three and a half years? Don’t even ask any other person, in case that person may give you a biased opinion about yourself, but you know yourself very well, just sit down and if you want assistance, sit down close to a mirror so that you can see yourself. Compare yourself the way you look now and the way you looked some three years ago and then you’ll know, and then decide for yourself whether you want to continue looking like this, that is if it doesn’t get worse in the next four more years. By the time you’ve finished having that conversation with yourself, make a decision”. 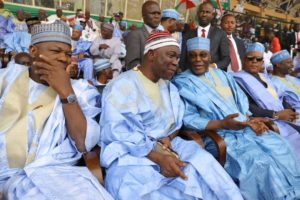 “If this is the kind of life that you want us to live, if this is the kind of insecurity you want us to perpetrate for Nigeria. Today in Nigeria thirteen (13) million of our children are out of school, one million, three hundred thousand (1.3m) of those children are from my home state of Bauchi. If we continue like this, the numbers are bound to increase, and the crisis we will face in the future will be more than this Boko Haram crisis that we are witnessing. This is because by refusing to give free and compulsory education to our children, we are raising an army for insurgency that will come and consume us as a people.
“So the vote in 2019 is not about anything, but about you, about you and about you. Do not make it about any other thing, but about what progress do you want to make? What kind of country do you want to raise your children in? What kind of country do you want to live in? What kind of education do you want to be giving to your children?
“All these are what we have in the 2019 ballot. And we trust as educated and enlightened opinionated people, that you’ll make the right choices.”
He lamented that “Boko Haram insurgency is still fresh, in fact in PDP there was never a time when in one day when more than one hundred soldiers were killed. In any other country, that would have made their security forces to declare a national emergency, but here it didn’t happen. God forbid, is that the Nigeria that we want going forward? Do you know that today, you cannot travel between Kaduna and Abuja? It is very difficult. Most of the people that can afford it are always commuting by train, and we thank God for the railways that was almost 95% completed by the PDP Government, before APC took over. If you travel by road, there is a 70% chance that you’ll be kidnapped. In those days however kidnapping was very strange in the Northern part of this country.
He urged the people of the North East to vote massively for the PDP for the development of the region saying, “We people in the North East have so much in this election. This is election is not about PDP and APC, it is not about Alhaji Atiku Abubakar and President Muhammadu Buhari, it is between you and as an individual Nigerian and a government that has not fulfill the expectations of Nigerian people, expectations of the people of the North East.
“We have the North East Development Commission that is supposed to kickstart the work of rebuilding the region but unfortunately it has not been constituted up to now. For more than three years we have advocated for the convocation of an international donor conference to raise fund for the development of the north east unfortunately the Federal government has not done anything about it.
Speaker Dogara noted that the current administration has failed in securing the lives and properties of Nigerians, noting that in spite of all the blame game, security in its current state is worst than under PDP rule.
Citing the case of the killing of more than a hundred soldiers in a day by Boko Haram insurgents, which he said ought to have led to a national emergency on security, coupled with the hunger and deprivation in the country, Hon Dogara said if the APC administration is allowed to continue in power with the way it is handling security, it would only be a matter of time before more insurgents rise up to unleash terror on innocent Nigerians.
Saying two-thirds of Nigerians can no longer afford three-square meals a day, he noted that the incidences of criminal attacks have increased with kidnapping a daily incidence.

How Africa and Europe can collaborate to tap benefits of digital economy, by Osinbajo