Copyright 2021 - All Right Reserved
Home News Vice President Osinbajo Wants to Use Dr. Jonathan to Distract Attention From His Indictment for Corruption
News

Vice President Osinbajo Wants to Use Dr. Jonathan to Distract Attention From His Indictment for Corruption

Former President Goodluck Jonathan has accused Vice President Yemi Osinbajo of recycling discredited information that he saddled Nigeria with debt and ruined the economy by the alleged corruption of his administration.
In a statement signed on his behalf by former aide, Reno Omokri, Jonathan asked: “How can Vice President Osinbajo, a man who had just been indicted by the House of Representatives in one of the biggest corruption scams ever in Nigeria’s history, have the gall to point accusing fingers on
Dr. Jonathan, a man that is celebrated internationally for his efforts at achieving Nigeria’s best rating in Transparency International’s annual Corruption Perception Rating when Nigeria improved 8 paces from 144 to 136 in 2014?”
He said further: “Having read through the sordid details of Professor Osinbajo’s corruption as revealed in the indictment by Nigeria’s House of Representatives, it is easy to understand why Nigeria made her worst ever retrogression in Transparency International’s annual Corruption
Perception under him this year, moving 11 paces backwards from 136 to 148.
“On the issue of debt, the fact remains that in the entire 16 years that the Peoples Democratic Party governed Nigeria, the total amount of money borrowed was ₦8.06 trillion Naira. These are facts sourced directly from the budget office controlled by the Buhari administration.
“However, in only 3 years, the All Progressives Congress led administration of President Muhammadu Buhari has borrowed a total of ₦10 trillion Naira. With this fact in hand, where does Vice President Osinbajo have the moral authority to point leprous fingers at former
President Jonathan?
“The claim by Vice President Osinbajo that former President Jonathan left $$63 billion in debt is also a false claim. The Jonathan administration inherited $42.23 billion in debt in 2011 which were debts borrowed by the states and the Federal Government. Throughout the five years that he was President, former President Jonathan incurred the wrath of several state governments because his administration refused to guarantee their foreign loans.
“The reason that Nigeria’s debt has ballooned under this administration
is because the Federal Government lacks the discipline that Jonathan had and are thus unable to curb borrowing by both the Federal Government and the states.
“For example, on Tuesday November 13, 2018, the Debt Management Office
revealed that in just 2017 alone, the Buhari administration borrowed ₦2.4 trillion to fund their budget deficit. This is besides other loans that they took in 2017 alone. That money is more than the funds
borrowed by the Jonathan administration in 5 years!
“To show to Nigerians the profligacy and ineptitude of the current administration, I draw their attention to the fact that between July and August 2018, the Buhari administration claimed it had shared $322
million Abacha funds recovered by the Jonathan administration to the poor. Then a week after it made that announcement, the Buhari government borrowed $328 million from China.
“The question is this, why would you share out $322 million one week only to borrow the same amount next week? Why not use the Abacha funds to fund government activities instead of adding to the already
strained debt burden?
“These are questions that Vice President Osinbajo should answer rather than making false allegations against former President Jonathan.” 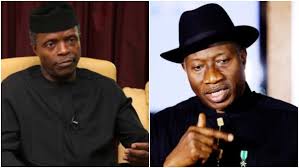 At a lecture on Monday in Lagos, Osinbajo said, “What do these figures show? They show that when oil prices were at the highest between 2010 and 2014 the government was borrowing heavily.
“From 2010 to 2014, debts moved from $35bn to $63bn. When we assumed office in 2015, the debt that the previous government left was $63bn.
“Today, three and half years later, the debt is $73bn.
“There are two reasons why despite high earnings we are poorer – the first is grand corruption and mismanagement of resources. And there is a difference between grand corruption and ordinary corruption.
“Grand corruption is directly stealing from the CBN, directly taking money from the treasury without any contract, no pretences; there’s no caution, you just take money. That was going on and I will give you several examples.
“When I got to the office as Vice-President, I couldn’t believe it. In one day, $292m was signed out and it disappeared. After that period, for two weeks, the Central Bank of Nigeria did not have cash dollar – $292m without any real explanation! We later discovered what became of the money.
“On another occasion, N60bn was moved out ostensibly for security purposes; but we know what happened.
“When you have a corrupt government, large sums of money which can be used for development is simply taken. If you are the President of Nigeria, you can literally say, ‘Go and bring money’.
“Look at a sum of N60bn; when someone can take N60bn; and $292m, that’s almost N70bn. Today, our TraderMoni scheme is costing us N20bn, where we’re giving to petty traders a loan of N10,000 and when they pay back, we give them N15,000 and when they pay back, we give them, N20,000. But somebody will take $292m, almost N70bn. If you have N70bn, you will solve the problem of seven million of those petty traders. That’s the kind of thing we are talking about and the kind of contrast that we’re trying to draw.”