REPORT OF INVESTIGATIVE HEARING ON THE VIOLATION OF PUBLIC TRUST IN THE NATIONAL EMERGENCY MANAGEMENT AGENCY (NEMA) SUBMITTED BY THE HOUSE COMMITTEE ON EMERGENCY AND DISASTER PREPAREDNESS. HR 52/2018
1.0 PREAMBLE
The House of Representatives in Plenary on Thursday, 15th February, 2018, mandated the Committee on Emergency and Disaster Preparedness to investigate the alleged “Violation of Public Trust in National Emergency Management Agency (NEMA)” and report back to it for further legislative consideration.
In furtherance to the above Resolution contained in the Votes and Proceedings of the House, dated 15th February, 2018, the Committee adopted the following terms of reference to determine the propriety or otherwise of the transactions undertaken and expenditures incurred in the following areas of concern by management of NEMA.
(i) The release of N5,865,671,389.26 and N3,153,000,000.00 as emergency intervention of Food Security to support the population affected by insurgency in the North-East in June 2017 and other releases for the North-East intervention;
(ii) The 6,779 metric tons of rice donated by Chinese government to the internally displaced persons in the North-East;
(iii) Payment of about N800 Million Demurrage on the donated Rice by the Chinese government;
(iiii) Over 10 Billion Naira being statutory 20% Ecological Funds released between January 2017 to February 2018 to NEMA;
(v) The Federal Government of Nigeria Flood Intervention in the sum of N1,600,000,000.00 to 16 States in July 2017;
(vi) The over N1.6 Billion released to NEMA for Evacuation of Nigerians stranded in Libya in 2017; and
(vii) Other ancillary issues.
2.0 MODUS OPERANDI
The Committee took the following legislative measures in the course of discharging this assignment:-
(i) The Committee held number of meetings to determine its modus operandi;
(ii) Letters were written to critical stakeholders to elicit their views on the issue under investigation;
(iii) Committee placed adverts in both Print and Electronic Media soliciting for memorandum and sensitizing the Public and stakeholders to the Public Hearing to ensure overall success of the investigation;
(iiii) All submissions/documents received at the hearing were objectively scrutinized and analysed for informed findings and recommendations to the House for adoption.
3.0 INVESTIGATIVE PUBLIC HEARING
The Committee conducted investigative hearing on the matter. The well-attended hearing was officially declared open on Wednesday, 21st March, 2018, by His Excellency, the Honourable Speaker of the House of Representatives, Rt. Hon. Yakubu Dogara who was represented by the House Leader, Rt. Hon. Femi Gbajabiamila. The Committee conducted the investigation over a period of three months in 11 Public Sitting with various stakeholders.
Invited stakeholders who made presentations at the hearing were from:
(i) The National Emergency Management Agency (NEMA)
(ii) Office of the Accountant General of the Federation
(iii) Federal Ministry of Finance
(iiii) Central Bank of Nigeria
(v) Federal Ministry of Budget and National Planning
(vi) Federal Ministry of Agriculture
(vii) Economic and Financial Crimes Commission
(viii) Governing Council of NEMA
(ix) Contractors: –
– Dangote Rice Ltd
– BUA
– WACOT
– Golden Agric Input Ltd.
– Olam Nig. Ltd.
– 3 Brothers Nig. Ltd.
(x) Office of Head of Service of the Federation
(xi) The Nigeria Customs Service
(xii) Nigeria Port Authority
(xiii) MAESK Line Clearing and Forwarding Agents & Transporters
(xiiii) APMT & Maresk Line Clearing Agents & Transporter
(xv) SEMA (16 states affected by the flood and 5 out of the 6 states of the North East).
(xvi) CAC
(xvii) PENCOM
(xviii) FIRS
(xix) ITF
(xx) NSITF
4.0 ANALYSIS OF THE SUBMISSIONS
5.0 OBSERVATIONS/FINDINGS
A. DONATION OF 6,779 METRIC TONS OF RICE BY CHINESE GOVERNMENT FOR IDP’S IN THE NORTH EAST. 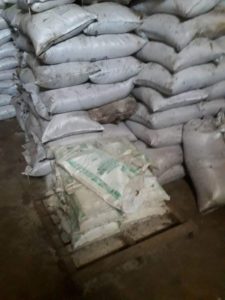 The rotten rice in NEMA stores