Following an angry outburst by a passenger who apparently was fleeced by alleged corrupt airport officials, and a video he made which went viral earlier in the week, the Federal Airports Authority of Nigeria (FAAN) has issued a statement of declaration that access to airport terminal buildings is free.
In a tweet, FAAN, without making reference to the video, advised passengers not to give money to anyone to access any airport terminal buildings. 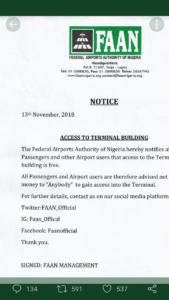