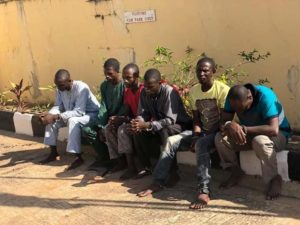 According to the state Director of the DSS, Mahmud Ningi, the suspects, all male, were tracked and arrested at different locations in Igabi, Soba, Kachia of Kaduna State; and Jos in Plateau State.
A statement by the Senior Special Assistant on Media to Governor Nasir el-Rufai, Samuel Aruwan, said , “The Kaduna State Government welcomes the arrest of suspects in the kidnap and murder of HRH Agom Adara, Dr. Maiwada Galadima.
“The government commends the security agencies for this breakthrough, and urges that all agencies must do their utmost to conclude investigations, arraign the suspects before a competent court and ensure that justice is done.
“Diligent prosecution of criminal suspects is vital to the social order, assuring victims that they will get justice and signaling to criminals the inevitability of punishment. This reassures citizens and duly increases confidence in the law enforcement agencies.
“Government appeals to all residents to keep the state calm, and to their utmost to preserve and uphold harmony in their communities. It is important to stand together as a law-abiding community to defeat criminal elements and deny them any succour, be it tribe, tongue or religion.”
Dr. Galadima was kidnapped on the Kachia-Kaduna Road a day after a community in his domain, Kasuwan Magani, went up in a mindless ethno-religious violence that claimed scores of lives. His wife, who was kidnapped alongside him and his driver, was released the next day, Saturday. His Police orderly and three others were gunned down during the kidnap.
After collecting a ransom of over N6 million on the head of the king a week after his abduction on October 26, his abductors allegedly murdered him and dumped his body along the Abuja-Kaduna expressway, amidst various conspiracy theories that fingered state government top operatives.
The late Agom Adara is said to be a strong and quiet opponent of government policies, especially those that seek to whittle down the powers of traditional institutions of the mainly Christian-dominated Southern Kaduna peoples.
Other unverifiable stories had spread in the State, where mutual suspicion on ethno-religious bases has reigned for decades.