Why we deployed troops around National Assembly – Army

Contrary to fears in some quarters that soldiers were being deployed in and around the National Assembly to curtail the activities of federal lawmakers, the Army has explained that the move is
intended to prevent Shiite demostratfors from accessing the Three-Arm zone that houses the Presidential Villa, National Assembly , and Supreme Court.
The deployment was first observed two days ago, the same day the Senate proceeded on a two-week recess.
The Shiites, also known as the Islamic Movement in Nigeria (IMNL) has been holding protests in Abuja intended to raise public awareness to the continued detention of its leader El- Zakyzaky and his wife despite court rulings for their release. Some of the protests have often turned violent when the protesters are confronted by security agents.
In a statement by its Assistant Director in charge of Public Relations, Captain Timothy Tagwai, the Army’s Brigade of Guards explained, “The attention of Guards Brigade Nigerian Army has been drawn to unfounded and unsubstantiated news trending on some online platforms about the presence of Military personnel at the National Assembly.
“The report that soldiers were trying to take over the National Assembly is false and misleading.
“The Brigade wishes to state that troops of Guards Brigade Nigerian Army are routinely deployed within Abuja and environs on receipt of any intelligence report of mischievous elements that may want to cause mayhem.
“Therefore, as part of the routine responsibilities of the Brigade, troops were deployed at the Three Arm Zone of the Federal Capital Territory based on an intelligence report of an invasion by the Islamic Movement of Nigeria (aka Shiite) to force their way into the Zone.
“Hence, Troops were deployed to forestall any breach of peace and security.
“The Brigade wishes to state that media platforms should verify their stories before publication to avoid misleading the general public. 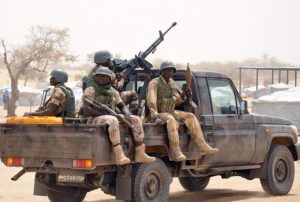 “The Nigerian Army is a professional organisation that conducts its operations with international best practices”.

How the Adara people are being ravaged in Kaduna State