Copyright 2021 - All Right Reserved
Home News To add insult to injury, Police invite Saraki, others for questioning over protests
News

After tear-gassing prominent Nigerians that inclused Senate President Bukola Saraki, Speaker Yakubu Dogara, Governor Aminu Tambuwal, Peoples Democratic Party (PDP) National Chairman, Uche Secondus, PDP Presidential aspirants, Senators, among others, the Police has now invited some to answer questions for disturbing public peace, attacking policemen, and causing gridlock in traffic..
According to the Police, Senator Bukola Saraki, Senator Dino Melaye and Senator Ben Bruce “who were captured on camera to have been involved in the disturbance of public peace and public safety, unlawful blockade of Shehu Shagari Way for several hours preventing motorists, road users and other members of the public from having access and passage on the highway thereby disturbing public peace and public safety and causing innocent people to scamper for safety and violent attack on policemen posted to ensure security of the Force Headquarters, pushing and hitting the policemen to forcefully enter the Force Headquarters to cause damage to Police equipment and Government properties”  were invited to report themselves to the IGP Monitoring Unit at the Force Headquarters on Monday, 8th October, 2018 for investigation. 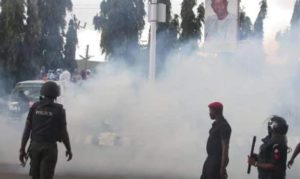 In a statement by its spokesman, Ag. Deputy Commissioner Jimoh Moshood, the Police said that at about 1:30 p.m. “unruly and violent protesters who are members of the Peoples Democratic Party (PDP) in their hundreds with thugs and miscreants inside several trucks and vehicles blocked the Shehu Shagari way in front of the Nigeria Police Force, Headquarters creating a gridlock of traffic on the highway and preventing motorists, road users and other members of the public from having access and passage on Shehu Shagari way thereby disturbing public peace and public safety adding that they caused innocent people to scamper for safety.
The Police said further: “The Police team headed by a very Senior Police Officer despite the provocation, after issuing words of proclamation, warning this unruly PDP protesters who were chanting war songs of ”we no go gree o, we no go gree, we no go gree”, charged the Police personnel who used minimum force and dispersed them.
“Senator Dino Melaye, Senator Ben Murray-Bruce and others yet to be identified were recorded on camera pushing policemen to forcefully enter the Force Headquarters to damage and destroy Police equipment and Government properties while Senator Bukola Saraki was at the scene of the attack in his car also captured on camera along with hundreds of miscreants and thugs in the acts of disturbance of public peace and public safety, …
“The Inspector General of Police has directed immediate investigation into this unprovoked and unwarranted attack on the personnel of the Nigeria Police Force and the Force Headquarters premises which is against the law and condemnable. The Force will do everything within the law to bring all perpetrators of this crime to justice, no matter how highly placed.
“Consequently, Senator Bukola Saraki, Senator Dino Melaye and Senator Ben Bruce who were captured on camera to have been involved in the disturbance … are hereby invited to report themselves to the IGP Monitoring Unit at the Force Headquarters on Monday, 8th October, 2018 for investigation.
Recall that PDP Chieftains had staged a protest to the INEC headquarters to ask that its candidate in the last Osun gubernatorial election, Senator Ademola Adeleke, be declared winner because he was robbed of victory.
From INEC, they proceeded to the Police headquarters in open trucks, but were stopped in their tracks as policemen engaged them. Teargas was fired to disperse the protesters, leading to a bee hive of activities on social media with photos of the incidents posted.
Curiously, most of the dramatis personae are already in Port Harcourt, Rivers State for Saturday’s PDP national convention to choose the party’s presidential flag-bearer for next year’s election.