An enactment of the final moments of the former Army Chief of Administration and retired army major-general, Idris Alkali, has been given by the Nigerian Army.
The site of a shallow grave where he was unceremoniously buried and exhumed by his murderous assailants was also shown to journalists.
Unfortunately, his murder is not unconnected to the spate of insecurity that is rocking parts of north-central Nigeria and other parts, occasioned by alleged herdsmen attacks and reprisal killings.
Many credible sources had in the past hinted that the General, who travelled without his army driver and orderly, which he retained after retirement, was a victim of circumstances beyond his control.
A day prior to the attack on him, it was reported that alleged Fulani militia, in a drive-by shooting had killed natives in a community around the area. In a fit of anger, the youths in the area went on rampage seeking vengeance. It was while they were in action the late General showed up.
The General Officer Commanding 3 Division, Jos, Major General Benson Akinroluyo, in a press briefing on Friday, more or less confirmed the story that had been on for weeks.
He said late Alkali was killed and buried in the shallow grave at a place called “No man’s land” in Lafande community of Jos.
Said he, “You would recall that on September 2, 2018, at about 8:00pm, unknown gunmen attacked a shopping complex located at Lafande Community on the outskirts of Jos metropolis in Dura-Du District of Jos South Local Government Area of Plateau State.
“As a result of the attack, 11 people were killed while others sustained various degrees of injuries. The attack triggered protest by the people of the area on the morning of September 3, 2018…”
On how the shallow was discovered, the GOC said, “Please note that four different sources not known to each other at various times took us to the opened shallow grave where the senior officer was earlier buried but subsequently removed.
“Furthermore, sniffer dogs that have been cultured with the personal effects of the senior officer led us to the same open shallow grave. That was the only grave we were led to by different people and sniffer dogs. We did not go to any other grave as the operation was carried out based on credible intelligence.
“Like I always say, the cordon and search operation is intelligence driven and that is why the operation has been conducted in line with international best practices and respect for human rights. This further explains why the (army) division did not clamp down on the entire community. Only the perpetrators are being targeted.
“At this point, let me reiterate that all the actors involved in this dastardly act who are still at large are known to us. All efforts are being made to get them arrested and be brought to justice as their photographs and personal details are with the relevant security agencies.
“The cordon and search operation conducted by own troops has really exposed the heinous crimes being committed by the few but fully supported and concealed by the entire community. I want to commend members of the public for their cooperation and still solicit for anyone with credible information on where the senior officer was reburied. It is the civic responsibility of the Dura-Du community to produce the corpse of the deceased senior officer and those who were involved in the killing of the senior officer.
“Finally, the division also wishes to emphasise its adherence to the principles and respect of human rights in the discharge of its constitutional roles. It further calls on everyone within its area of responsibility to remain vigilant and report any suspected breach of the peace to security agencies,”
According to the GOC, some youths in the protest stopped the Toyota Corolla car in which the recently retired and unaccompanied general was traveling in. On introducing himself, he was attacked and killed.
His personal effects were shared by the killers, and others who proceeded to push his car into an abandoned mining pit. 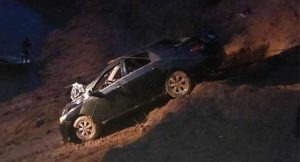 Late General Alkali’s car retrieved from the pond in Dura Du, near Jos.

“The irate youths who followed his car to the abandoned mining pit filled with water on many tri-cycles popularly known as “Keke NAPEP” jubilated for reason best known to them or for mission accomplished.
“He was later buried in a shallow grave in an area popularly known as, “No man’s land” within the community.”
Recall that nearly a month ago, the Army triangulated General Alkali’s movement using his cell phone activity to the area around the Dura Du community, where the mining pit is located.
When the Army initially attempted to drain the pond to conduct a search and rescue operation, the community women, some allegedly half clad, resisted, citing cultural concerns about their ancestors.
The Army beat a retreat, promising to return to the draining process. They did the next day. The process led to the discovery of the General’s Toyota car with some personal effects, and other vehicles for missing persons in the past.
Scores were arrested for questioning, a prochess believed to have led to the latest discoveries by the Army. Many are believed to still be in detention.