Publisher insists he has evidence on bribe-taking againct Kano Governor

…Claims to have 15 video evidence
The publisher of Daily Nigerian, Jaafar Jaafar has said that despite the series of threats to his life and harassment since reporting the Kano state Governor was caught on secret camera receiving wads of dollar as kickbacks from contractors, he’s not intimidated to compromise on his position.
Speaking to the BBC in Abuja, Jaafar Jaafar insisted he was in possession of unassailable evidence of the Governor’s culpability as reported by his online newspaper. The journalist claimed loyalists of the Governor have been reaching out to him to stop further revelations of the Kano’s corruption. 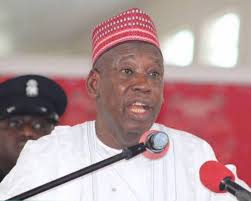 Mr. Jaafar has been forced into hiding since his newspaper reported that the politician had been caught on camera receiving kickbacks amounting to $5 million from unnamed contractors.
“Certain individuals have reached out to me and asked me to be careful because a group of government loyalists are plotting to attack me for my refusal to bury evidence against Ganduje,” said Mr. Jaafar.
Amidst a trending rumour of possibility of the first-time Governor being replaced as APC governorship candidate in the 2019 elections, the party is yet to issue any official statement in that regard.
The Kano State Commissioner for Information Muhammad Garba has, however, denied the report, warning that it was a mere attempt to smear the reputation of the Governor.
By News Digest.