For the second time in four months, the Police in Abuja is at the centre of summarily executing another woman, incidentally the niece of former Finance Minister, Mrs. Nenadi Usman.
Former Aviation Minister, Mr. Femi Fani Kayode alleged she was “trailed, targeted, intercepted and shot dead” 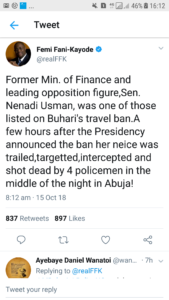 But agency reports say that the Inspector-General of Police (I-G), Mr Ibrahim Idris, has ordered the detention of policemen allegedly involved in the death of Miss Anita Akapson in Abuja on Saturday.
According to a report trending on NAN website, Idris also ordered immediate investigation of the incident in which the deceased was allegedly shot dead by a policeman, who later claimed that it was a “mistaken identity’’.
The deceased, believed to be a staff member of National Emergency Management Agency (NEMA), was allegedly killed close to her residence in Maitama, Abuja, by the police during an argument.
The number of policemen involved in the incident has not been established and police authorities have remained silent on it.
A statement by the Police Spokesman, acting DCP Jimoh Moshood, on Monday in Abuja, the I-G directed the Commissioner of Police in the Federal Capital Territory (FCT) to commence the investigation.
Idris commiserated with the family of the deceased and assured that justice would be done in the matter.
“The Commissioner of Police, Federal Capital Territory (FCT) Command is already in touch with the family.
“The public will be informed of the outcome of investigations into the incident,“ the statement said.
A similar incident occurred in July when a member of the National Youth Service Corps (NYSC), Miss Angela Igwetu, was shot dead by a police officer in Abuja while on her way home with her friends.