From Chuks Moses, Awka
With tears dripping down her cheeks, Mrs Akuabata Chinelo Nwankwo narrated how the devastating effect of erosion in Oko, Anambra State, has rendered families homeless and destitute.
Vehicular and human traffic were disrupted in the early hours of Tuesday when the women of Oko community in Orumba North Council of Anambra state blocked the Oko-Umunze Federal highway to protest the menace of sand excavation in the community.
Oko, the home community of the late former Vice President, late Dr. Alex Ekwueme has remained legendary for the devastating effect of gully erosion and landslides that have continued to eat up their environment, farmlands, homes, churches, schools, barns, graves, sacred groves, shrines and markets. 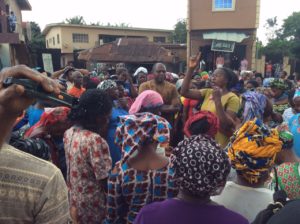 The protesting women led by Mrs Maurine Izuegbunam (Isi Ada Oko) and President-General of Oko Progressives Union, Cyprian Nwanmuo, said the protest march and prayers procession, which kicked off 4 a. m., was the chosen option because the state government appears to have turned its back on the community.
According to Izuegbulam, the Nigeria Erosion and Watershed Management Project (NEWMAP) exited Oko erosion control projects sites after its advice to the community to stop sand excavators from the various control sites was ignored.
She pointed out also that the audacity of the sand excavators in confronting all known constituted authority and the deafening silence of Governor Willie Obiano, whose most prominent aide was allegedly accused of appointing and empowering the excavators, and using them as his personal revenue making window.
The protesters noted that since the governor has allegedly abandoned the community in the last two years of the struggle, they have now volunteered to go into exile to other communities and states until when a governor who cares takes over the mantle of authority in Anambra.
Mr Nwanmuo who led the maiden protest by the community some months ago said the State’s Commissioner for Environment was forced to visit the excavation sites where he ordered the workers there to stop.
Sadly, he added, the excavators brazenly countered him to his face, brandishing an empowering letter allegedly from the Governor aide.
“That was all we heard about the action of the state government…and these excavators even went further to arrest and detain the Oko community leaders for daring them,” he said.
The women who came on the prayer procession alongside their children, fowls, other domestic animals said they would proceed on exile at once.
But not without calling on the federal government and NEWMAP to use all the instruments of power and authority to instill sanity in Oko, as the ravaging erosion and landslides have decimated their homeland.
Mrs. Akuabata Chinelo Nwankwo, the Peoples Democratic Party (PDP) candidate for the Orumba Federal Constituency in the forthcoming 2019 general elections, appealed to governments at all levels to come to the aid of the community now as it was left to imagination what the situation would look like during next rainy season.
She promised to make the erosion control and related policies one of her key priority when she is elected into office next year.

Nurse from hell kills over 100 patients