It is Agbaje versus Sanwo-Olu in Lagos

Jimi Agbaje has got another chance to be Governor after he humbled fellow contestant, Adedeji Doherty to pick the Peoples Democratic Party (PDP) ticket for next year’s governorship election for Lagos State.
He polled 1,100 votes to defeat Doherty who polled 742 votes.

Announcing the results, the presiding officer of the election said: “I Senator Victor Kassim Oyofo, with all humility, announce the results of the PDP primary for the office of governor in Lagos State, which took place yesterday and was concluded this afternoon.
“There were two contestants, One Chief Olujimi Agbaje and Chief Adedeji Oluwagbemiga Doherty.
“It was a keenly contested election, very fair. In my view, an example of what democracy should be.
“They fought a good fight, the process was open, everyone expressed their desires and the votes have counted.
“At the end of the exercise, Agbaje had a total score of 1100 votes, and the runner up, Engineer Adedeji Doherty, had a healthy 742 votes.
“By the powers conferred on me by the electoral Act and the Constitution of our party, I wish to announce and declare Mr Jimi Agbaje as winner of this contest.”
Agbaje lost the last governorship election in 2015 to Akinwumi Ambode but will now slig it out with Babajide Sanwo-Olu, the candidate of the All Progressives Congress (APC).
Recall that Chairman of the National Working Committee (NWC) panel that went to Lagos to conduct the APC primaries, Chief Clement Ebri, declared that Mr. Babajide Sanwo-Olu won the contentious election he cancelled a day earlier.
He adopted the position of the party’s nation chairman, Comrade Adams Oshiomhole, who declared Tuesday night that the primaries in Lagos had been conducted and anyone aggrieved could only complain after results are declared.
Tunde Balogun, the APC Chairman for Lagos State had announced that incumbent Governor Akinwumi Ambode polled a total votes of 72,901, while Sanwoolu polled total votes of 970, 851 to emerge winner of the contest. 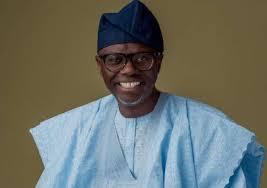 “We thank the members for participating in the election to peacefully select APC standard bearer for next year’s election.
“They did this with enthusiasm and dedication. To be clear, an APC primary election was held in Lagos and this was in accordance with the party constitution.
“Pursuant to the constitution, it was stated that the primary would be conducted in direct open system where each voters would queue behind their preferred candidate.”