The Kano State Governor, Umar Ganduje, is to appear before the Kano State House of Assembly to tell his side of trending videos showing him allegedly receiving bribes.
His appearance comes as another video hit the internet showing him, again, allegedly collecting bribes from contractors. However, the video merely shows him exchanging documents and what appears to be money. 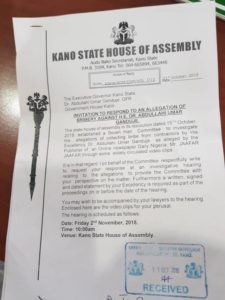 But the publisher of the Daily Nigerian online newspaper, Mr. Jaafar Jaafar, whose paper released the earlier videos denied being involved in the latest release.
“I swore an oath with the Holy Quran before tendering the several videos at the Kano State Assembly and I could not have been responsible for the current video trending on social media. Therefore Daily Nigerian did not release any other video after the appearance before lawmakers,” Jaafar said.
Accusing fingers are however being pointed in the direction of the Kano Assembly to which Jaafar released the videos when he appeared before it last week.
Others suspect it might have been other “political and business forces” who are aggrieved they were either shortchanged politically or financially.
Many side glances are also been cast in the direction of a Kano Senator in Abuja, and security agencies that are in possession of the videos.
The new video from Abdullahi Ganduje, allegedly receiving money from a contractor who mentions the office of the deputy governor, and a Governor of one of the South-eastern States.
A new dimension in the video is the listing of the the names of contractors, projects and the voice of the purported bribe giver.
It also has the translation in English with dates and timelines. This time around Governor Ganduje appeared in a black Kaftan in a red and white cap, with his clear voice and that of the bribe giver.

NOA / ILO in partnership to end child labour in Nigeria
ICPC confirms arrest of D’Banj over N-Power funds fraud
We will never be good Muslims or Christians if we do not embrace, respect and honour one another and our faiths
America-based film director returns, plans documentary on Gov Adeleke