The Islamic State West Africa Province (ISWAP), a faction of Boko Haram, has executed Hauwa Leman, an aide worker with the International Committee of the Red Cross (ICRC), TheCable has been informed.
The terrorists also promised to keep Leah Sharibu, the Dapchi schoolgirl, as “a slave for life”, TheCable has also exclusively gathered.
More to follow… 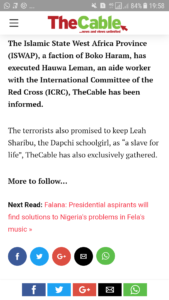 Meanwhile, the Federal Government has said it is shocked and saddened at the killing of another aid worker by Boko Haram on Monday, despite the actions taken by the government and the widespread appeal to save the young woman.

In a statement issued in London on Monday, the Minister of Information
and Culture, Alhaji Lai Mohammed, described the killing as dastardly, inhuman and ungodly, saying nothing can justify the shedding of the blood of innocent people.
He commiserated with the family of the aid worker, and said the Federal Government did all within its powers to save her life.
”It is very unfortunate that it has come to this. Before and after the deadline issued by her abductors, the Federal Government did everything any responsible government should do to save the aid worker.
”As we have been doing since these young women were abducted, we kept the line of negotiations open all through. In all the negotiations, we acted in the best interest of the women and the country as a whole.
”We are deeply pained by this killing, just like we were by the recent killing of the first aid worker. However, we will keep the negotiations open and continue to work to free the innocent women who remain in the custody of their abductors,” the Minister said.
He thanked all the friendly governments that have continued to work with Nigeria for the safe release of the abducted women, and the clerics across religious lines who have been pleading for their release.

CAN Commiserates with the Victims of Flood Disaster, Wanton Killings in Nigeria