After eight weeks of his disappearance and a search and rescue operation, the body of the missing Gen. Idris Alkali has been found in an abandoned well in Guchwet, Jos South Local Government Area.
Late Alkali was on his way to Bauchi from Abuja, when irate youths protesting an attack by gunmen, allegedly believed to be Fulani militia, intercepted him and murdered him. The Toyota Corolla car he was travelling in was pushed into a mining pond in Dura Du community, near Jos.
Alkali was the former Chief of Administration, Army Headquarters Abuja.
The army  narrowed its search to the mining pond in Dura-Du in Jos South local government of Plateau, after investigations that included triangulating his phone. 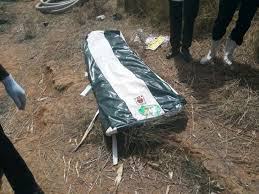 The recovered body of General Alkali.

Brig. Gen. Umar Mohammed, Garrison Commander 3 Division Nigeria Army, told journalists beside the well on Wednesday: “”You are all aware that Major General Idris Alkali was declared missing on September 3. The Nigerian Army gave us three tasks. One, to find General Alkali dead or alive; two, to find his car which is a Toyota Corolla; and three, if anything happened to him, to find who are responsible for it .
“As you are all aware, on the September 29, 2018, we were able to discover his vehicle and we saw his personal effects which confirmed that it was him. In the same vein, last week, I called you and showed you where he was buried in a shallow grave.
“We have declared some people wanted and based on that, some of them, reported to the police. Some of them, who took part in his relocation took us where he (body) was relocated.
“He was actually relocated to an abandoned well, which is behind me here. We came here this morning, we drained the water and we were able to salvage the body of General Alkali.
“This is to tell you that now the two aspects of the assignment are completed. The remaining aspect is for all those who took part in this henious act – nobody, no matter how connected the person is must not go unpunished. For those who have not submitted themselves to the police, we are on their trail. We will find them sooner or later.”
The body of the missing general was moved by four generals into an ambulance after a military parade.