From Ron Jacob, Jos; with additional reports, photos by Channels Television; and NAN.
Troops from the 3 Division of the Nigerian army, led by Brigadier-General Umar Mohammed behaved as officers and gentlemen when they went on a search and rescue for missing retired General Idris Alkali in a pond in Dura Du in Jos South Local Government Area. Women of the community prevented them from draining the pond to see if his car was submerged there.
The women said the pond was a source of livelihood and had been there since the days of their forefathers, and they would not allow it to be drained.
But it is unlikely that the soldiers will take kindly to such resistance when they return this Friday or weekend to carry out their orders.
Everyday.ng gathered they entered further negotiations with the villagers to allow them drain the pond.
“The community leaders actually gave the go-ahead before the troops came, but the women just simply resisted,” a source said. “We hope they will agree this time around,” he added.
Mrs. Mary Yakubu, leader of the protesters, told the News Agency of Nigeria (NAN) that the water had been part of the community over time, adding that it had “a huge cultural significance”.
“If the water is evacuated, it could lead to the death of our sons and husbands,” she claimed.
But Gen. Mohammed, in a reaction, said that nothing would stop the army from evacuating the water.
“The only thing that can stop us is a directive from the Army Headquarters,” he declared.
According to Channels Television, the troops embarked on the search and rescue operation for retired Major General Idris Alkali, who went missing on September 3.
Commander of the division and leader of the mission, Brigadier-General Umar Mohammed, told Channels Television on Thursday that the troops had been deployed to Dura Du in Jos South local government area of Plateau State. 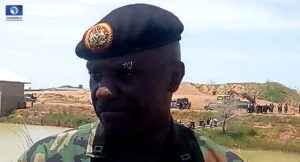 According to him, following a preliminary investigation, the vehicle of the missing officer was seen close to a pond in the area.
He said, “Based on credible intelligence, we had to come here. We have been here for the past one week. We are trying to find an officer who is still declared missing that is Major General M. Alkali (retired)”.
Mohammed, who is also the Chief of Staff of Operation Safe Haven (OPSH), said the military will do its best to unravel the circumstances behind the retired officer’s disappearance. 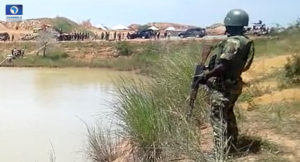 He explained that the military had also received information that some vehicles had been pushed into the said pond.
Consequently, Mohammed stated that the Force will do its best to find the missing officer even if it meant draining the pond.
“We came here for the past three days seeing if we could salvage anything from the river. But this river, being a mining site is very deep. You can see that we have a crane. At the last resort, we have now decided that we will evacuate the water from the pond so that we can see what is inside,” he said.
The retired general (Alkali) was said to have been travelling from Abuja to Bauchi in a black Corolla vehicle on September 3 before he went missing.
Efforts to reach him, proved abortive as his phone was switched off.

Has Tinubu forgiven Ambode as he allegedly breaks down in tears?