From Ron Jacob, Jos.
The Plateau State government has been forced to declare a dusk-to-dawn curfew in Jos, the State capital as spiralling violence escalate.
Tension began after unknown gunmen killed a family of nine in the early hours of Friday at Rukuba road, Jos. The spill-over that allegedly left 13 other persons dead.
The government released a statement imposing the curfew by the Acting Secretary to the State Government. 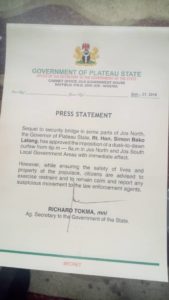 An eye witness told our correspondent in Jos that the gunmen attacked the family in the night of Thursday as the residents woke up only to discover that the entire family were no more.
“The killings that followed after the night attack left about 13 persons dead, as gun shots were later heard in the same community with people running helter skelter for their dear lives, ’’ he added.
As the news of the attack filtered out, there was a stampede in Terminus, the city centre, as people began to lock-up their shops and run to safety.
The tension spread to Gangare Quarters near Abbatoir with some irate youths brandishing dangerous weapons such knives, cutlasses and swords.
One Chukwu, escaped through the benevolence of a Hausa man, who hid him and gave his car for his boy to drop him by Plateau Specialist Hospital where he took a vehicle to his house at Bukuru.
“I reported to work this morning not suspecting anything amiss until I saw a young Hausa boy lifting a knife in an attempt to kill me.
“I kept begging him not to kill me and moving backward, but thank God, a Hausa man called the irate boy to order and took me into his house and thereafter provided a vehicle that took me to safety, ’’ Chukwu narrated.
According to him, “I give God the glory for using this man to save my life today.’’
Contacted, Mr Tyopev Mathias, the Plateau Police Command Public Relations Officer (PPRO), confirmed the killings occasioned by the unknown gunmen attack but could not state the exact number of the casualties.
“At about 22.20 pm of Thursday, Sept. 27, we had a distress call there were sporadic gunshots around Rukuba road, opposite Kowa Hotel.
“We then mobilized our patrol team and stormed the area and chased away the attackers who ran away as a result combined superior weapons from the combined team of Police and Special Task Force (STF).
“Some people who reside close to the hills were rescued while some people lost their lives while others sustained injuries as a result of the attacks, ’’ he stated.
Mathias, appealed to the public to be calm and go about their normal businesses as the security operatives were on top of the situation.
He said that the security operatives were on a serious search for the attackers even as investigations into the matter was ongoing.