The governor of Enugu state, Chief Ifeanyi Ugwuanyi and the entire Peoples Democratic Party ( PDP ) family in the state today gave tacit support to the ambition of top presidential contender, Senator David Mark.
He spoke as another PDP aspirant, Governor Aminu Waziri of Sokoto State promised Borno and Yobe PDP delegates in Maiduguri that if elected president next year, he would use education to discourage children in the North-East from being recruited by insurgent groups.
Incidentally, both men met at the Nnamdi Azikiwe International Airport in Abuja on their way to lobby delegates votes.
Tambuwal also promised to take urgent steps to stop the Lake Chad basin from further shrinking.
State Chairmen of the party in Borno and Yobe, Alhaji Sani Mustaphs Nguru and Zana Gaddama, respectively, assured Tambuwal of their support at nect week’s national convention of the PDP.
Governor Ugwuanyi expressed his unalloyed support when the Senator Mark presidential campaign team visited him in his office in Enugu Wednesday. The Governor said that the aspirant has the capacity and competence to turn around the living condition of Nigerians. 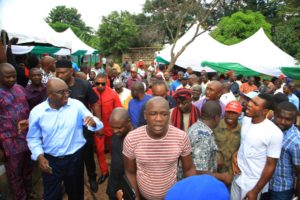 “I worked with him at the National Assembly. I can attest to his capacity and competence . We shall support him to ensure he gets the ticket of our party“ Ugwuanyi stated.
Senator Mark told his host that “I entered the race because I have what it takes to address the socio- Economic and political challenges facing our nation”.
He stated that “the level of insecurity and economic down turn in our country today requires a man with a proven record of excellent performance to confront. Besides, we must ensure Peace and justice for all”.
The Senator added: “I am a man of my words . For me, it will be a covenant with Nigerians if given the mandate. I have the blue print to tackle the economy through massive industrialization, agriculture and small and medium scale industry.
“Every Nigerian will feel the impact of the economy if I am elected.. I have the ability to do so.”
He stated: “Irrespective of the number of presidential aspirants under the PDP platform he said I am confident of victory but we (Aspirants) have resolved that who ever wins through a transparent and credible process will be supported by all”.
State chairman of the party Mr. Augustine Nnamani added that Senator Mark is the kind of leader the nation needs at this time promising that Enugu delegates would do the needful in his favour.
Nnamani told Senator Mark to do all that is needed to change the conditions of Nigerians for good if elected saying “I know you have the pedigree to make a difference“.