The Governor of Sokoto, the Rt. Hon. Aminu Tambuwal, on Sunday gave insight into how former President Goodluck Jonathan became Acting President through the popular Doctrine òf Necessity.
Tambuwal said that the Governor of Bayelsa State, the Honorable Henry Seriake Dickson, approached him in the heat of the tension that followed the incapacitation and death of former President Umoru Yar’Adua, in 2010, to work out the process that culminated in the emergence of Jonathan as Acting President.
A statement by Governor Dickson’s Special Adviser on Media Relations, Mr. Fidelis Soriwei, stated that Tambuwal spoke during a condolence visit to the country home of Governor Dickson, Toru Orua, Sagbama Local Government Area of the state.
Tambuwal said that Dickson persuaded him to accept the plan to make Jonathan Acting President in the interest of national unity which he obliged as the then leader of the North West caucus in the House òf Representatives.
According to him, the two governors who were both members of the House of Representatives, collaborated to draft the document that paved the way for Jonathan to be made the Acting President of Nigeria.
He stressed that Dickson took advantage of his membership of the National Assembly to play several major roles in stabilizing the country. 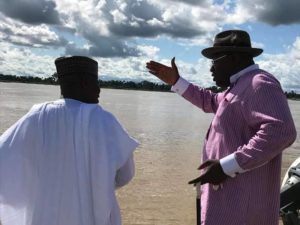 He said, “God has elevated you to become Attorney General òf Bayelsa, then a member of the National Assembly and now Governor of Bayelsa State. And even in the National Assembly, you played several major roles that helped to stabilize this great country.
“I remember very well when we had to collaborate with you and work with you to ensure that our dear brother and leader, Dr. Goodluck Ebele Jonathan was made the Acting President of the Federal Republic òf Nigeria.
“To those of you who may not be aware, my brother and friend approached me being the leader of the North West to say my brother, we have to do this in the national interest and I agreed with him. And both of us agreed and drafted that resolution that made Goodluck Jonathan the acting President of the Federal Republic òf Nigeria.
“So it is not today that my brother Dickson and I have been working to stabilize this country. You are a great son of the country, you are a great son of this community, you are a great son of the Federal Republic òf Nigeria.”
The Sokoto State Governor said that the late Mrs. Gold Coast lived well and left behind great legacies as represented by the governor, his exemplary performance in governance and his siblings.
In his remarks, Dickson said that he and his Sokoto counterpart had had years of productive collaboration in building bridges and strengthening the unity of the country.
He thanked Tambuwal for the show of solidarity, the honour and the sacrifice of paying the visit to his country home in spite of his tight schedule.
He restated the decision of the Dickson family to establish a cancer awareness centre in honour of the memory of his late mother to prevent avoidable deaths from the deadly disease.
Dickson, who described Tambuwal as an illustrious son who had indicated interest in the leadership of the country, noted that the only way to halt the ravages of cancer was regular screening, early detection and treatment.

2019 Elections: We Must Not Return the Country’s Governance to Thieves, We Must Continue to Challenge Corruption – APC