Citing her non-clearance by the All Progressives Congress (APC) to contest the gubernatorial primaries in Taraba State, the Minister of Women Affaird, Senator Aisha Alhassan, has resigned her office and membership of the party. 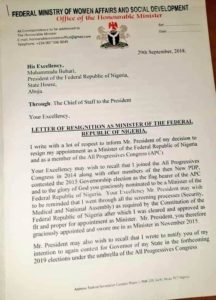 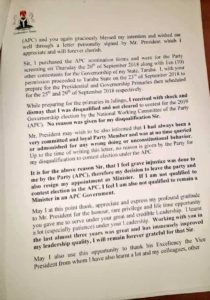 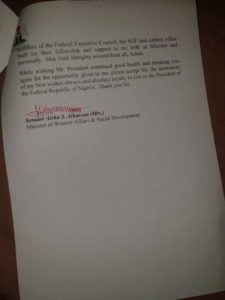 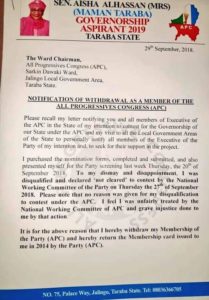 Senator Alhassan and Communications Minister, Chief Adebayo Shittu, were screened out of the list of those cleared to participate in APC’s Governorship primaries.
Party Chairman, Adams Oshiomhole was to explain why they were axed. He said Shittu failed because he did not participate in the compulsory one year National Youth Service Corps (NYSC) scheme.
On Alhassan, he said: “As for the Honourable Minister of Women Affairs, she has issues that have to do with party loyalty. Our constitution is clear and it dictates that to contest elections or even hold office in the APC, you must be loyal to the party in every material concern.
“From all she had said in the past and even her comments and general attitude during the screening, the NWC reviewed everything taken together and we arrived at the conclusion that she does not possess the level of loyalty that the APC requires for her to contest elections on our platform.
“We made it clear when the defections happened that the APC may well benefit from these defections if it helps us to be more critical in terms of whom we give platform to contest elections and that there are core values that binds the APC together and they are non-negotiable.
“The Electoral Act and the APC constitution forbid anyone from being a member of more than one political party at a time. You cannot be a member of APC and be a card carrying member of another party but when you have a situation where it would appear, based on what you know and based on what I know that someone is probably APC in the day time maybe for the purpose of retaining certain offices and they are PDP at heart.”
Oshiomhole may have been referring to a leaked video showing the Minister pledging loyalty to Peoples Democratic Party (PDP) presidential aspirant, former Vice President Atiku Abubakar.

In the video which went viral  last year, the former Taraba Senator made comments backing Atiku during an Eid el Kabir visit. She said, “Mr President, our father, Nigeria’s president for 2019, God willing, in your presence today are your people who have been placed under your care for forever…”
Shortly after on the Hausa Service of the BBC, she justified her position: “Atiku is my godfather even before I joined politics…And again, Baba Buhari did not tell us that he is going to run in 2019.”
“Let me tell you today that if Baba said he is going to contest in 2019, I swear to Allah, I will go before him and kneel and tell him that ‘Baba I am grateful for the opportunity you gave me to serve your government as a minister but Baba just like you know I will support only Atiku because he is my godfather. If Atiku said he is going to contest.”
“If because of what I said, I am sacked, it will not bother me because I believe in Allah, that my time has elapsed that is why…”
“Baba is not a mad man like those calling for my sack. They have been sending it and spreading that if Baba sees this I will be sacked.”