With just a few weeks to the end of his tenure, it is clear that Ekiti Governor, Mr. Ayo Fayose, has troubles awaiting him from the Economic and Financial Crimes Commission (EFCC), as a leaked memo from the commission to the Comptroller-General of Immigration shows.
In the memo (as attached), the commission’s acting chairman, Ibrahim Magu, pointed out that Fayose was under investigation for corruption-related matters.
He said there was reasonable suspicion that the Governor would make a go for the borders and should be watch listed and arrested, if he did.
Asked if it was appropriate to ask a sitting Governor to be watch listed and arrested while still in office, the Commission’s spokesman, Mr. Wilson Uwujaren, declined to comment because he had not seen the memo.
Under the Constitution, a governor enjoys immunity from arrest until after his tenure.
Fayose is notorious for vitriolic attacks on President Muhammadu Buhari and his administration. 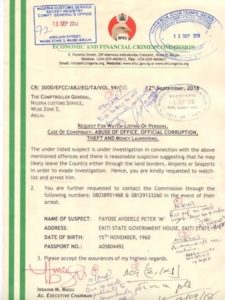