Key members of Governor Seraike Dickson’s Restoration Team on Thursday submitted their nomination forms for the National Assembly seats on the platform of the Peoples Democratic Party, (PDP) Secretariat in Yenegoa.
They include a close confidant of the State Governor and Commissioner for Works, Barrister Lawrence Ewrudjakpo, the Speaker, House of Assembly,Rt. Hon. Kombowei Benson, lawmakers representing Yenagoa/Kolokuma/Opokuma and Sagbama/Ekeremor Federal constituencies, Hon. Douye Diri and Fred Agbedi as well as former Secretary to the Bayelsa State Government Prof Steve Azaiki.
The aspirants alongside their teeming supporters on Thursday defied heavy downpour to submit their nomination and intent forms ahead party primaries slated for the end of the month. 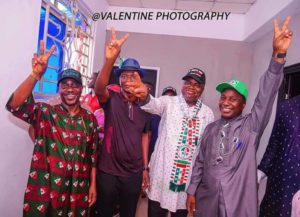 The party leadership prior to the shift in the date for the submission of forms had earlier fixed the date for the purchase and submission of the forms for Friday, 7th September, 2018.
Ewrudjakpo, in an interview with newsmen shortly after the submission of his nomination form said his decision to join the race is hinged on bringing government to the grassroot, and, as well fast tracking infrastructural development in the state.
He bemoaned inadequate federal presence in the state, in spite of her contributions to the socioeconomic growth of the country.
The Commissioner said these are the issues that needed to be addressed through restructuring and proper legislation.
He said as a lawyer, he will bring his wealth of experience to bear in the arLt of law making and true representation.
The aspirant thanked the teeming youths from the Senatorial district for the confidence reposed in him and promised not to let them down.
Speaking in the same vein, the Speaker, Rt. Hon. Kombowei Benson, Hon. Douye Diri and Fred Agbedi, said law making is not a tea party but a serious business.
They submitted that their experience as lawmakers would assist in sponsoring bills that would be beneficial to the people of the state.