Copyright 2021 - All Right Reserved
Home Politics A vote for me is a vote for re-unification of Nigeria, Tambuwal tells FCT PDP delegates
Politics

A vote for me is a vote for re-unification of Nigeria, Tambuwal tells FCT PDP delegates

Ahead of the forthcoming national convention of the opposition Peoples Democratic Party (PDP), Governor Aminu Waziri Tambuwal of Sokoto State has promised that a vote for him as president come 2019, will be a vote for the re-unification of Nigeria, which is currently divided along ethnic, religious and other primordial lines.
Tambuwal, who is aspiring for the presidential ticket of the PDP, also said that if given the mandate, he would reposition and restructure Nigeria to ensure that every region in the country realizes its full potentials.
He was addressing the party’s delegates from the Federal capital Territory (FCT) at the Ibro Hotels in Abuja on Thursday.
Tambuwal, who is the immediate past Speaker of the House of Representatives, told the delegates that his aspiration was fired and motivated by the spirit to rescue Nigeria by taking back power from the hands of incompetent leaders and ensuring that Nigerian people are united and the country secured.
According to Tambuwal, “our country has never been this divided and there’s the urgent need to rescue this country.  As a country, we have the resources and the manpower. What is lacking is the right leadership that has the capacity to harness these resources to develop Nigeria and make one of the great nations in the world.”
He assured that if elected president, he would assemble a team of qualified and competent Nigerians to ensure that the country is not only secured but also reposition “so that all our children are in school, properly trained and gainfully employed.”
To avoid the possibility of Nigerian children being lured into joining bad groups like Boko Haram, Tambuwal said his administration would vigorously pursue deliberate policies of ensuring that no Nigerian child is out of school.
On restructuring, Tambuwal declared:  “I also believe in restructuring Nigeria.  Let every region of Nigeria realize its full potentials.  I know and respect the agenda of each region and what they are all yearning for.”
For instance, he said, the people of the South-South wanted the opportunity of utilizing the wealth that comes from oil to develop their region; the people of South-East want more states created out of the region, the North want better education and more development and the South-West people are agitating for true federalism and devolution of power. 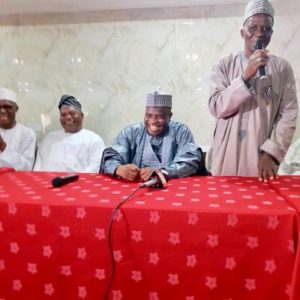 “As a government, we shall create the opportunity for us to all sit down and look as these aspirations.
“I am not that president of Nigeria that will shut down the people from agitating for their rights and demands,” he said.
He further assured that if elected president, his administration would have a good representation of women and the youths in the cabinet because “the bulk of our women and youths are very productive, and we can harness these potentials.”
Responding, the State Chairman of PDP in the FCT, Alhaji Ibrahim Biko, assured Governor Tambuwal of support from the FCT delegates because “we believe you will carry us along.  We are promising that we shall not disappoint you.”
He lamented that in spite of the vast lands that had been taken away by the Federal Government from the indigines of the FCT, “we are not recognized and we are not represented in Government.”
On Governor Tambuwal’s delegation were a former Speaker Tempore of the House of Representative, Rt. Hon. Terngu Tsegba; former Minister of Power, Engr Bello Suleiman; former State Chairman of All Progressives Congress (APC) in Sokoto state, Alhaji Suleiman Usman; former Director-General of the National Orientation Agency (NOA), Chief Mike Omeri; former Chairman, House of Representatives committee on Communications, Hon. Yemi Arokodare and; Prince Kassim Afegbua, spokesman of former military president, General Ibrahim Babangida, among others.

‘I Will Build A Foudation of Fairness, Justice, Equity, Inclusiveness’ – Kwara Guber Aspirant