We are not involved o, says Police IG as Seyeifa receives briefing from Osinbajo

●PDP says Daura is a fall-guy
The Inspector-General of Police (IGP), Ibrahim Idris, has said he was taken by surprise at the siege of the National Assembly by operatives of the Department of State Services (DSS).
He quickly added that his men were not involved in the early morning operation that initially saw masked operatives block the gates of the National Assembly. The Federal lawmakers later forced their way in but could not access their Chambers because staff, who should open them and service the Senators, were locked out with journalists. Only Peoples Democratic Party (PDP) Senators and a sprinkling of House of House of Representatives members were seen seated in the foyer. 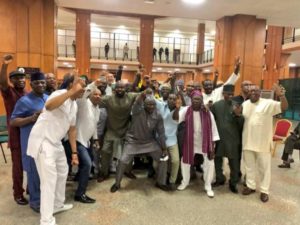 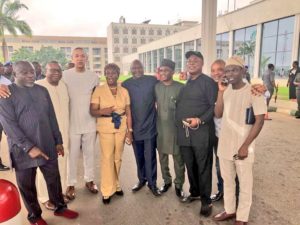 Lawmakers in the foyer and outside the National Assembly.

Speaking with journalists at the nation’s seat of power, Idris, who had two meetings with Acting President, added that the Force Headquarters would issue a statement on the incident. 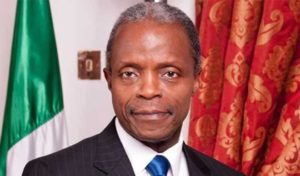 Recall that almost an hour after Acting President Osinbajo announced the sack of the Director-General of the DSS, Lawal Daura, the siege at the Assembly complex ended. The masked, gun-totting men and others drove out.
Said Idris: “Obviously, like I said, I have not got­ a detailed brief on that. So, when I get the brief, in fact we are going to iss­ue a (press) release,’’ the Police boss said.
Apart from Idris, the Acting President met with Matthew Seiyefa, the Bayelsa-born newly appointed Acting Director General of the Department of State Services (DSS), in his office for nearly 50 minutes.
Details of the meeting were not made public as even the new acting head of the secret police declined comments when journalists approached him.
He came to the Aso Villa in an SUV car but drove out in a Peugeot 508, after his meeting with Osinbajo.
Seiyefa, the most senior director in the DSS is an Assistant Director-General and was the Director, Institute of Security Studies, Abuja.
He has about a year to go in service and has been director in Lagos, Osun and Akwa Ibom States.
Meanwhile, the Peoples Democratic Party (PDP) says the Acting President should not use the sacked Director General (DG) of the Directorate of Security, Lawan Daura as ‘the fall guy’ for Tuesday’s invasion of the National Assembly by security forces.
In a statement, the party insists that the invasion by the DSS and Police was with the absolute knowledge and approval of President Muhammadu Buhari, Vice President Osinbajo, and the All Progressives Congress (APC), adding that Daura’s sack was an afterthought, diversionary and deceitful.
The PDP recalls that it issued series of statements at the weekend alerting Nigerians to the plots against the National Assembly and democracy ahead of President Buhari’s overseas trip noting that the Presidency was silent on all the alarms raised by the Buhari Presidency.
“The Presidency’s sack of Daura was a damage-control stunt and a knee-jerk gimmick which came as a response to the national and international outcry against the armed invasion of our legislature by security agents as directed by the Buhari Presidency.
“The action of security agents that blocked the National Assembly is treasonable and must attract appropriate sanctions under our law. It is not enough to take populist approach of easing Daura out of office. Our party demands an immediate investigation by an independent panel of inquiry headed by a retired Chief Justice of Nigeria to examine the remote and immediate cause of the invasion.
“Moreover, Section 16 of the Legislative House (Powers and Privileges) Act, 2017, provides that any person, who by any act, obstructs members of the National Assembly from performing their legislative duties, is liable and punishable by imprisonment.
“Furthermore, Nigerians observed that the invasion was not only by the DSS, but also had the involvement of the Police, whose high command has not received any sanction or reprimand by the Presidency for its serial acts of impunity.
“Finally, we commend PDP federal lawmakers, Nigerians, the media as well as the international community who rose in defence of our democracy, even as we remind all not to let down their guards;” the statement said.
Earlier in the day, Osinbajo decried the siege of the National Assembly complex, saying it was “a gross violation of constitutional order, rule of law and all­ acceptable notions of law and order,” adding that it was an “unlawful act wh­ich was done without the knowledge of th­e Presidency is condemnable and complete­ly unacceptable.’’