Copyright 2021 - All Right Reserved
Home News Senators to APC: Saraki Not Cause of Your Failure
News

Senators to APC: Saraki Not Cause of Your Failure

Chairman, Senate Committee on Navy, Senator Isah Hamma Misau and his counterpart in the Committee on Banking, Finance and Other Financial Insitutions, Senator Rafiu Adebayo Ibrahim have advised the All Progressives Congress (APC) and its leaders to desist from looking for scapegoats for the failure to fulfill their promises to the electorate by constantly blaming Senate President, Dr. Abubakar Bukola Saraki.
Misau and Rafiu in a statement stated that the APC leaders have continued to whine about what Saraki did or did not do to ensure the Buhari government failed without caring whether it was reasonable to believe that one single individual who had been continuously assailed by the government would at the same time be in a position to ground the government.
“APC leaders are being clever by half. They have spent most of the last 38 months harassing Saraki and sponsoring media attacks against him. Now that the man has been vindicated by the courts and he has decided to leave their party, they have devised another propaganda stunt to start heaping the blames of their failure to bring positive change to Nigeria on Saraki.
“For three years of the APC administration, former President Goodluck Jonathan was the scapegoat they blamed. Now that it dawned on them that nobody is listening to that tale by moonlight again, their propaganda machinery has shifted focus to Saraki as the new man to blame. These are characters who cannot take responsibility for their inability to provide good governance as they promised.
“Must these people blame somebody all the time? Were they elected to bring in positive change or to shift blames? It is irresponsible for people invested with popular mandate to always look for somebody to be held responsible for their failure to fulfill their promises and give expression to the mandate they were given.
“Instead of concentrating on how to use the next six months before the general elections to hasten the completion of infrastructure projects, enunciation of policies and initiation of programmes which can improve the standard of living of the people and ameliorate the consistent failure of the last three years, the APC is now led by demagogues who seem not to care if they bring the entire country down.
“The new leadership of the APC have continued to advertise the inability of the party to manage victory, their penchant for violence as a way of saving their faces and their lack of the much needed temperament to wield together a country with diverse culture, ethinicity and religion like Nigeria. 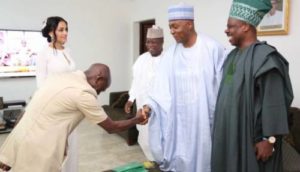 Oshiomhole bowing before Saraki shortly before the Senate President defected.

“When they continue to blame Saraki for their failure, was the man responsible for their failure to appoint ministers for the first five months of the administration when the economy was just straying without direction? Is he responsible for the constant demarketing of the economy in international circles by the President of the country? Is Saraki responsible for the refusal of the government to prosecute its members indicted of corrupt practices, thereby destroying its anti-corruption campaign? Is he responsible for the high level incompetence and lack of capacity which sign-post the activities of the government? Is Saraki responsible for condoning the inability of the security agencies to appropriately respond to the security challenges which are now pervasive across the country? Did Saraki set up the ‘government within government’ which has continued to ground the administration?
“We can go on and on to query the logic of this APC blame game. However, we need to warn them to stop this cheap antics and face the real task of governance. Nigerians did not elect them to be giving excuses. Very soon, they will have to give account to the people and nobody will listen to the constant thrash about Saraki this, Saraki that.
“If the best strategy the APC ideas team can come up with on how to pre-occupy Saraki and prevent him from rallying his fellow party members in the Peoples Democratic Party (PDP) for victory in next year’s general election as well as prevent him from pursuing his legitimate ambition in the 2019 elections, then they need to return to the drawing board. Saraki is unfazed and he is not even bothered”, the Senators stated.

Did Tambuwal sack 252 aides or they resigned?