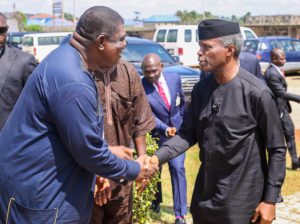 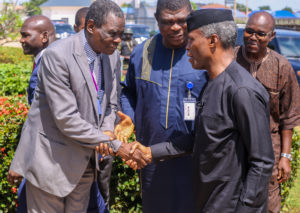 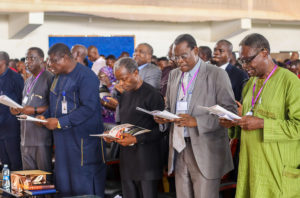 Everyday.ng reports that the annual National Last Days Gathering of Calvary Ministries, CAPRO, opened Tuesday in Abuja. Its official opening ceremony Wednesday at the Navy Officers Wives Association (NOWA), in Karshi, Abuja was graced by Vice President, Prof. Yemi Osinbajo SAN, who delivered a paper titled, “Challenges of Confronting the Present Darkness and Making Disciples in our Land and the World.”
So far, Prof. Danny McCain and Bro. Amos Aderounmu have delivered their papers, while others like Bishop Abiodun Ogunyemi of the Anglican Diocese of Zaria, Rev. Cannon Tim Olonade, Pastor Muyiwa Bamgbose, Benjamin Osawe, Bro. John Idoko, Bro. Solomon Olalere, Dr Richard Ikiebe, Engr B. U. Bassey,  and Professor Egodi Uchend will do so in the coming days.I
Calvary Ministries (CAPRO), a missionary agency, was founded in April 25, 1975. The Last Days Gathering (LDG) was first held in Kufena College, Zaria, Kaduna State in1975; and has held yearly since. Like in past conferences, resource materials, accommodation, and feeding are provided free by organisers.
“The LDG conferences focuses on the signs of the end times to build up and prepare Christians for the task of urgent evangelisation. Unique eschatological teachings are given to help them apply their hearts on this serious matter. The emphasis on the soon coming of Christ was very strong at the time,” organisers said.
The theme for this yearly conference, which normally holds in the last days of the year into a new year, is “Confronting This Darkness.” 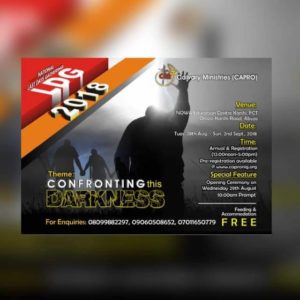 Why there should be consequences for actions in Nigeria – Osinbajo

Will you let God do what He wants to do in your...

Get into God’s good book

Our memories, our miseries?

The name of Jesus, our sure banker