A leaked Police preliminary report by the Inspector-General, Ibrahim Idris, has indicted the former Director-General of the State Security Service, Lawal Musa Daura, in the matter of the siege on the National Assembly last Tuesday.
The report, dated 8th of August, 2018, to Acting President Yemi Osinbajo SAN, said he was working with unnamed top politicians, but it noted that Daura, now under house arrest in Abuja, did not involve sister security agencies in his unilateral security move to storm the National Assembly complex. 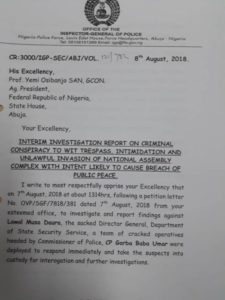 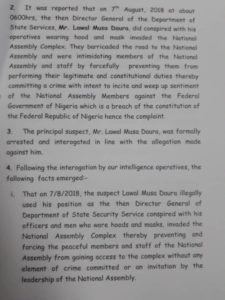 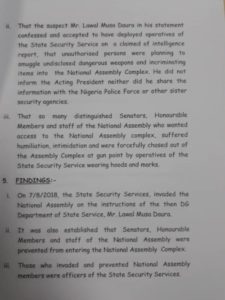 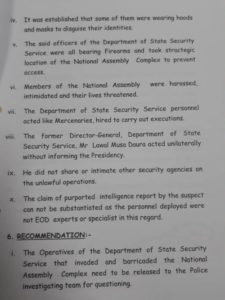 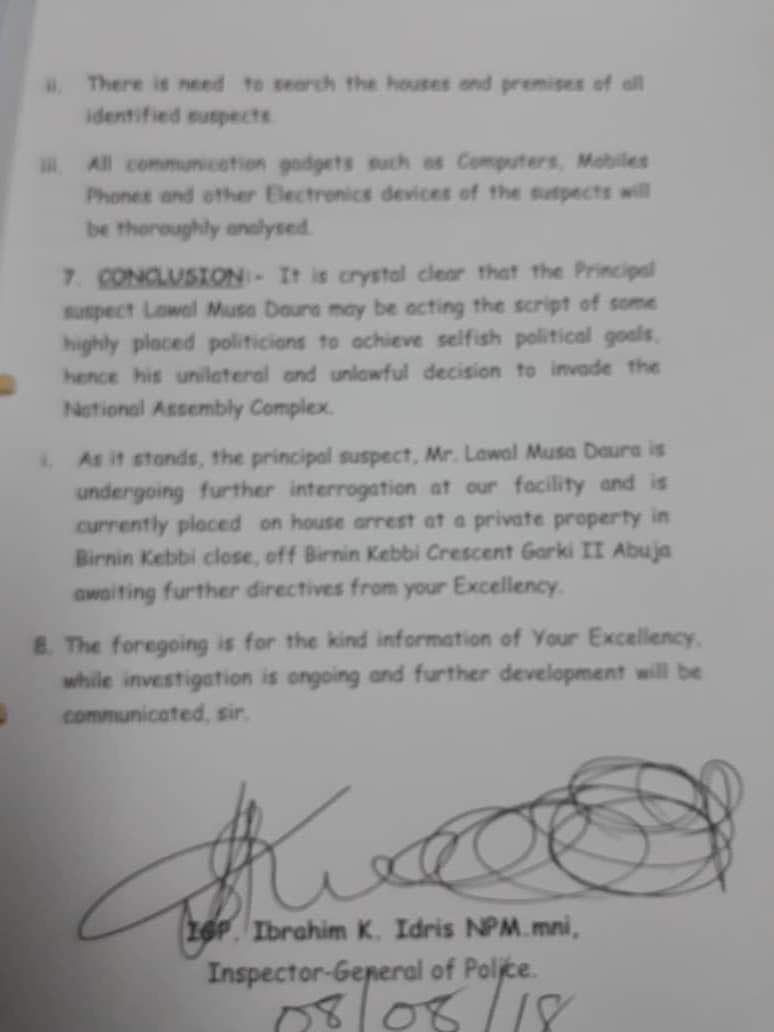 The Police report to Osinbajo.

Without mentioning names, the Police suggested a search of the home of suspects, while their communication gadgets should be analysed.
Recall that armed and masked SSS officials blocked the gates leading to the complex, initially preventing federal lawmakers, mostly of the Peoples Democratic Party (PDP) from going in. They forced their way in later.
It was initially thought that All Progressives Congress (APC) Senators had been smuggled in to effect a rumoured impeachment of Senate President Bukola Saraki, but they were nowhere to be found when opposition Senators got in.
An angry Osinbajo condemned the action of the SSS, and subsequently announced the sack of Daura, ostensibly after consulting vacationing President Muhammadu Buhari.
Daura was arrested when he went to the Ado Villa for a meeting with Osinbajo and bundled out to a Police location.
Recall that a statement by a former Deputy spokesman of APC, Mr. Timi Frank, had alleged that the National Chairman of a political party, a top security chief and 30 APC Senators – led by a Senate Leader of spearheading a fresh plot to illegally impeach the President of the Senate, Dr. Abubakar Bukola Saraki.
Frank who raised the alarm in a statement in Abuja on Tuesday morning, said the group met Monday night in Abuja to perfect strategies on how to carry out the plot.
He said that he had reliable information that the meeting was at the instance of a party chief who is currently pressuring President Muhammadu Buhari to accept his proposal of using “crude tactics” to topple Saraki and his Deputy, Senator Ike Ekweremadu.
He said according reliable information emanating from the meeting, that one of the National Vice Chairmen of the APC joined the party chief in pushing for the illegality while some APC Senators and House of Representatives members at the meeting kicked against the plot saying any “forceful removal of Saraki without due process will not fly with Nigerians.”
The lawmakers, according to Frank, were said to have further alerted the party chief and the APC leadership that they only have 30 Senators on ground which will fall short of the 73 Senators required to lawfully impeach Saraki.
According to them, while other APC Senators have since travelled out of the country on vacation, a proposal to appoint Senator Lawan from Yobe State as Saraki’s replacement would be a direct violation of the Federal Character Principle since the Speaker of the House of Representatives, Rt. Hon. Yakubu Dogara is from Bauchi in the Northeast zone like Lawan.
Following the red flag raised by some of the APC Senators who warned of the consequences of the proposed illegality, according to Frank, the meeting was said to have been rescheduled to reconvene by 11am (Tuesday) morning to enable the party boss to call Mr. President in London at 9a.m. (Tuesday) morning to brief him on the progress made so far.
It was further learnt that the candidature of both Senators Lawan and George Akume was made to the Presidency to make his choice.
He alleged that an added figure above $400,000 is already being offered to lure individual lawmakers to support the plot to illegally impeach Saraki. He said the lawmakers are also being wooed with offers to drop all corruption charges against them by the Federal Government.
He insisted that Saraki’s life and personal safety is at stake while appealing to Nigerians and leaders of the international community to urgently speak out to protect the President of the Senate, Saraki, and safeguard democracy in Nigeria.
He said that the illegal plot to break into the Senate Chambers to illegally impeach Saraki, if allowed to happen, could lead to chaos and anarchy of unimaginable proportion in the country, capable of burying the nation’s democracy, apart from the danger it portends for the lives, security and safety of Nigerians.