Ex-President, Dr. Goodluck Jonathan, has described former Secretary-General of the United Nations, Mr.Kofi Annan as a renowned icon of peace and a great son of Africa.
Annan, according to Ghana’s President, Nana-Addo Dankwa Akufo-Addo, died peacefully in his sleep, quoting the late international diplomats wife.
In a tribute to Annan who died Saturday at the age of 80, Jonathan noted that his extensive reforms reinvigorated the UN systems and positively impacted international relations.
A statement issued by the former President’s spokesman, Mr. Ikechukwu Eze, further described the passing on of the former U.N. scribe as a sad loss to humanity.
The statement said: “I am deeply saddened by the death of Kofi Annan, a world renowned icon of peace and diplomacy. He was a distinguished and accomplished international public servant and one of Africa’s most prominent diplomats.
“As the United Nations Secretary-General, Annan introduced far-reaching reforms that reinvigorated the UN systems and positively impacted international relations.
“A consummate diplomat, Annan successfully managed the contending powers in the UN and stood firmly for development, human rights and a peaceful world; a commitment that earned him the Nobel Peace Prize.
“Even after leaving active service, Annan remained robustly engaged in promoting good governance, diplomacy, mediation, and humanitarian services. His demise is a sad loss to Africa and the World.”
President of the Senate, Dr. Abubakar Bukola Saraki, described Anan’s demise as the end of a golden era in global politics and international relations.
He described the late Annan as a quintessential African diplomat on the global plane and a citizen of the world, who deployed his vast capacities to tackle intractable global challenges ranging from hunger, conflict, epidemic and restoration of peace in war-torn countries.
He noted that many developing nations benefitted immensely from the humanitarian efforts of the late Annan during lifetime as he was able to raise the concerns and challenges confronting hitherto forgotten peoples and nations in the Assembly of world powers.
According to Saraki: “Annan was a quintessential African Diplomat who bestrode the world stage with dignity, finesse, admirable restraint and wisdom. He was a diplomat’s diplomat. He dedicated his immense expertise, experience and energies to resolving some of the world’s most pressing problems and conflicts, including most recently, the Rohingya refugee crisis. He was a citizen of the world.
“Annan was an African avatar and God’s messenger of peace to the world. His demise is a huge loss to the international community and to humanity. Africa has indeed lost one of her best. He shall be sorely missed,” Saraki stated.
He commiserated with the wife and children of the deceased, the Government and people of Ghana, the Economic Community of West African States (ECOWAS), African Union (AU), the United Nations, international humanitarian organizations and the diplomatic community over the sad and irreparable loss.
He prayed God to grant the soul of the deceased mercies and to count him among the righteous ones in His abode. 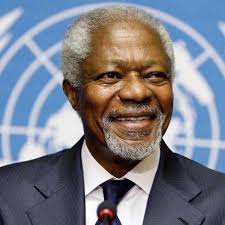 According to Gombe Governor, Ibrahim Dankwambo, the late Kofi Anan was, without doubt, Africa’s gift to the world.
He adds: “As Secretary General of the United Nations, the second African but the first black man to hold that position, Anan was the perfect advertisement copy for the African heritage of diligence, resilience, brilliance, humaneness and all the virtues that make up impeccable character.
“On his watch, the world witnessed but survived terrible wars, violent disagreements and catastrophic disasters. He managed all with uncommon grace and unparalleled brilliance. The Nobel Peace Prize awarded Anan and the UN he headed was testimony to his place in history as the man who diligently tended the world as a sacred garden, saved it from the ravages of unreason and made it a better place for all.
“Out of office, he remained committed to the welfare of all humanity and dedicated himself to providing joy for those in distress, irrespective of their colour or creed, hope for the hopeless and a future for those whose present circumstances would have made a mess of their tomorrow.
“He was the international civil servant who went beyond the call of duty to truly serve humanity. Africa has lost one of its most illustrious sons. Humanity has lost perhaps it’s most diligent and most masterly tending hands. May Kofi Anan’s soul rest in peace.”

Saraki Lauds Akwa Ibom Gov for Refusing to Be Distracted