The People’s Democratic Party (PDP) seems to be in a difficult political situation with the presence of heavyweight presidential aspirants who all hope to dislodge the governing All Progressives Congress (APC) in 2019.
The defection of strong politicians from the APC in addition to the existing bigwigs has formed a heavy storm in the PDP as majority of those rejoining the party is believed to have axes to grind. 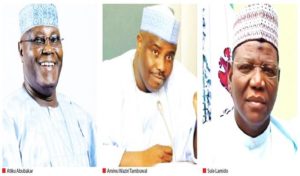