Nigerians on social media continued to throw brick-bats over the plan by the All Progressives Congress (APC) in the United Kingdom to stave off the verbal attacks on President Muhammadu Buhari anytime he visits the country either for medical tourism or vacation.
In a series of tweets, Dr. Philip Idaewor, the Chairman of the APC in UK, called out patriotic Nigerians and members the party to a solidarity protest in support of the President on Tuesday. He urged them to come along with party paraphernalia and public address systems.
He noted that since 2015 when the President was elected, he has been the butt of what he described as rowdy protests by some groups, whenever he visited London
The protesters, he said, often abuse and call the President uncharitable names, which tarnish the country’s image and distress him.
As soon as Idaewor’s tweets went up, there was a barrage of responses berating his call and government, while others backed his call to protest in support of the President.
On social media, there have protests in the Abuja House in London where President Buhari has taken residence.
In the main, protesters lament the political and other socio-economic situations at home. 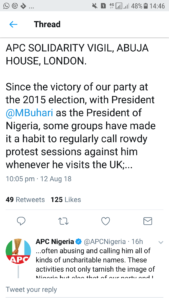 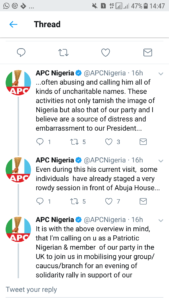 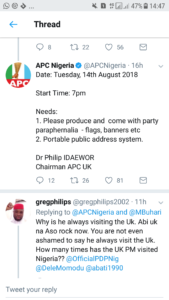