Verbatim: What Northern CAN told Buhari

●What is happening to innocent citizens in Northern Nigeria and in particular Christians is a systemic genocide and must be stopped immediately.
By Rev. Yakubu Pam, on behalf of the Executive of CAN, Northern States and Church Denominational Heads.
We are the Executive Members of the 19 Northern States and the FCT of the Christian Association of Nigeria, CAN. This visit is our second to the Villa since you assumed office as the President. We are indeed pleased for granting us audience each time we have expressed the need to visit you and are appreciative of the appointment and role of the Secretary to Government of the Federation in this regard.
Mr President, Sir, as the Chief Custodian of the security of our nation, we have come to you with tears on our faces because of the renewed attacks on innocent Nigerians especially in Northern Nigeria and in particular Christians in the north of the country where hundreds of persons mostly children, women and the aged have been maimed and killed in night raids by armed herdsmen, a sad development which has compelled our cry to you in this visit in order to call on you to deploy all at your disposal as a government to halt this senseless blood shedding and massive destruction of lives and property in the land, a situation which could lead to a state of anarchy leading to an unpredictable future.
We are particularly worried at the widespread of insecurity in the country where wanton attacks and killings by armed men identified in various instances as Fulani herdsmen, who have turned bandits now terrorising communities almost on a daily bases and unchallenged despite the huge investments by your government to strengthen the security agencies. Sir, the perpetrators should not be allowed to go scot free. We demand justice for all, no matter the religion, creed, tribe or region of the assailants because of the sanctity of life. It is even more worrisome that these huge numbers of needless deaths in 2018 alone have been recorded in various attacks, especially in the northern states of Benue, Plateau, Taraba, Adamawa, Kaduna, Kwara, Borno, Zamfara, Kogi and other states when the country is not in a state of war. 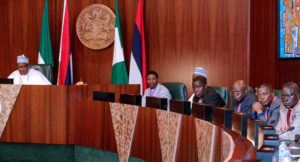 The most unfortunate incidences that have attracted the attention of the international community to Nigeria for the wrong reasons are the recent killings in Plateau, Adamawa, Benue, Kaduna and Zamfara states among others. While the early morning attack on a Catholic Church in Benue where two Priests and 17 worshippers were killed is still fresh, an Assemblies of God’s Church pastor was killed with his family at Barkin Ladi, a Baptist Pastor and a Pastor’s son were killed, just to mention a few, give a religious coloration to the entire attack which is dangerous for inter-religious harmony in the country.
We also view these attacks as ethnic cleansing, land grabbing and forceful ejection of the native inhabitants from their ancestral land and heritage. What is happening to innocent citizens in Northern Nigeria and in particular Christians is a systemic genocide and must be stopped immediately.
Mr President, we reject the narrative that the attacks on communities in the north are “farmers/herdsmen clash.” How could a war on innocent communities be a ‘clash’ when one group is persistently the attacker, killer, maiming and destroying hapless groups; and the other is regrettably being killed, mutilated with places of worship destroyed?
Why are the attacks and killings not only on the farm but when people are sleeping at night or going about their businesses? How could it be a ‘clash’ when the herdsmen are hunting farmers in their own villages/communities while the farmers simply run for their lives?
How can it be a ‘clash’ when the herdsmen are the predators and the inhabitant/indigenous farmers are the prey? Until we call a disease by its real name and causatives, it would be difficult to correctly diagnose it for the right curative medications.
It is as a result of the foregoing that we hereby offer the following prayers:
1. That the security architecture of the country should be re-visited to give it a new lease of life and responsiveness to earn the required trust, confidence, and support of the general populace.
2. All communities ravaged by the herdsmen violence in the North should be rebuilt and adequate security be put in place to enable displaced persons to return to their homes and means of livelihood.
3..The Federal Government should roll out a robust advocacy programme to enlighten the nomadic herders on modern cattle rearing against open grazing and roaming across states and national boundaries.
4. The federal government should encourage herders to acquire land for cattle ranching across the country as a means of private business investment.
5. While the Federal Government under the current administration is celebrating an agricultural revolution, most farmers, especially in the north, can no longer go to their farms due to the sustained attacks by armed herdsmen. We, therefore, urge the government to reconcile its priority by providing the necessary safety for the farmers to go on with their farming activities.
6. We observe that the continuous abduction of underaged Christian girls who are forcefully converted to Islamic religion and given out for marriage without the consent of their parents breeds religious disharmony.
We, therefore, wish to state that the situation does not only violate the fundamental human rights of the girls but is also a call to anarchy if such actions were to get an even score by the Christian population. The appeal, therefore, is for your quick intervention to ensure that the numerous girls held under such circumstances are released to their parents.
7. In the spirit of the above observation, we wish to demand that intensive and speedy actions should be taken for the release of girls in captivity, especially Leah Sharibu.
8. That all perpetrators including the so-called foreigners as alleged of these heinous crimes against humanity in parts of northern states should be arrested and prosecuted to serve as a deterrent to others.
9. The Federal Government should as a matter of urgency make adequate provisions for farmers who have been adversely affected by this undesirable herdsmen attacks.
10. We are appealing to Mr President to call on his colleagues in politics in respective of a political party to work together and make 2019 election to be free and fair and a model for all other African countries.
Conclusion
In conclusion, we want to appreciate Mr President once more for granting us an audience and for your attention. It is our sincere prayers that all will be well with Nigeria under your leadership, Amen!
Thank you for your audience.