Following an attack on the Governor of the State, Hon. Simon Lalong, the Plateau State Government has condemned in very strong terms the attack on the convoy by those it described as hoodlums shortly after leaving an IDP camp at Anguldi, Jos South Local Government Area of the State.
The residents, it was gathered, pelted the Governor’s car and others in his convoy with stones and other objects to express their anger and disappointment that “it took him a whole three weeks to visit his grieving subjects”.
Recall that IDPs and stakeholders had frequently frowned that the Governor, President Muhammadu Buhari, Vice President Yemi Osinbajo, and other visiting dignitaries who chose to ignore those involved in the carnage preferring formalities in Jos than the attacked communities or the DIP camp. Only a few government dignitaries, like Speaker Yakubu Dogara, visited IDPs. 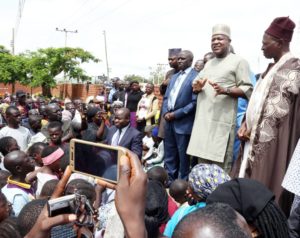 Security concerns was cited as reason for dignitaries restricting visits to Jos.
But State Commissioner for Information, Yakubu Datti, rendered the attack on the Governor differently.
He said in his statement: “The hoodlums, acting on the script of their sponsors, laid ambush on the highway and attacked the Governor ‘s convoy with stones, rods and other unidentified objects,  damaging vehicles in the convoy including those belonging to the press corp, security and relief agencies.
“The attack is coming at the heels of a similar invasion on the Plateau State Government House about two weeks ago, where Government properties, vehicles of Civil Servants and visitors to the Government House running into millions of naira were destroyed.
“The Government finds it regrettable that while its efforts at restoring peace is yielding results, certain unpatriotic elements are bent on returning our State to the sad era of blood letting by instigating religious and ethnic hatred, for cheap political gains.
“The Government views these attacks as an affront on the authority of the State and will therefore take appropriate measures to checkmate merchants of division and death.
The Governor wishes to assure citizens that Government will not relent in ensuring that the safety of citizens is guaranteed and the relative peace sustained.
“The Governor also wishes to thank the Security Agencies for professionally carrying out their duties with restrain even in the face of extreme provocation.
The IDPs must not allow those who do not wish them well to use their misfortune for ulterior motives.
“We call on parents, religious and community leaders to counsel their children/members not to become willing tools in the hands of conflict merchants.
Government has set a machinery in motion to fish out and bring to justice all those conniving to present the state as unsafe by sowing the seed of discord among the good people of Plateau state”.