Melaye resurfaces; thanks God, short on details of abduction

Allegedly abducted Kogi Senator, Dino Melaye, has re-surfaced 24 hours after a colleague of his, Senator Ben Murray-Bruce, announced on social media that he was abducted by unknown gunmen.
Melaye, who re-appeared on Twitter, was short on the details of his alleged abduction, except to thank God.
He was billed to appear in court in Lokoja, the Kogi State capital. 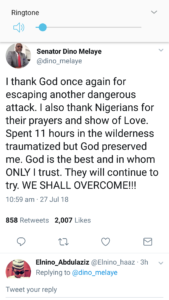 Doubts have been expressed as to what actually happened to Melaye, made worse by the Police which said that no report had been made anywhere by anyone over the alleged abduction.

I did not make that comment about Oshiomhole – Oyegun