The National Assembly Joint Ad-hoc committee has recommended the immediate suspension and prosecution of Senator Ovie Omo-Agege.
The committee recommended that the representative of the Delta Central Senatorial District be sent home for 180 legislative days, which would automatically keep him from the business of lawmaking for the rest of the 8th National Assembly tenure. 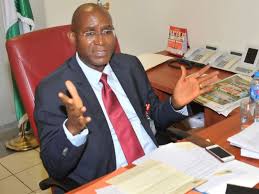 The Senator was serving a similar punishment in April when he stormed the Senate Chamber, allegedly in company with six strange men to snatch the Mace, the Senate’s symbol of authority.
He went to court and got the punishment reversed.
Also, the ad-hoc committee recommends that Senator Omo-Agege and six other suspects who allegedly breached the sanctity of the Senate Chamber to remove its mace be prosecuted for treasonable felony and assault on National Assembly staff.
Among other recommendations, the Joint Committee wants the security around the Assembly to be reviewed.

No faction in APC, we remain united under President Buhari