Governor Simon Bako Lalong has told an American Embassy delegation that despite the recent disruption of peace in some parts of the northern senatorial district of Plateau State, the State still remains the Home of Peace and Tourism.
The Governor’s comments come as a Foundation put the number of slaughtered persons in the senatorial district at 233, adding that the killings happened because the warning signals it sent to security agencies were ignored. 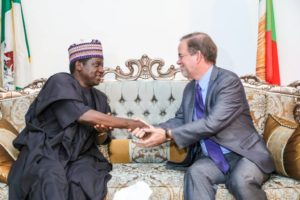 Governor Lalong and American diplomat, Young in Jos on Monday.

Said Stefanos Foundation in a recent publication available to Everyday.ng: “Prior to the attacks, Stefanos Foundation received alarm from various communities, and as usual, sent early warning messages to appropriate agencies of government. But despite the information given to the security agencies, the Fulani Militia still carried out attacks on the communities.
“Stefanos Foundation’s fact finding team set out to visit the victims of the ugly attacks in the various affected areas to assess their situation. The team met with the victims (survivors) where they are now taking refuge in about 13 locations.
“These locations include: CAC and ECWA in Bokkos, with 260 people, Geo-sciences complex in Anguldi, with 3, 061 people, Riyom Community Hall, with 300 people, RCC Fan, with 382 people, ECWA Lawuru, with 452 people, St. John Viani, Barkin Ladi, with 1,552 people, COCIN RCC Heipang, with 3,026 people, LCC Ban, with 820 people, COCIN Gasa, with 800 people, Karos Barkin-Ladi, with 132 people, LCC Rampiang, Mangu with 400 people, Dorowa Soho Primary School, with 360 people, bringing the total of displaced persons to about eleven thousand, five hundred and fifteen (11, 515) internally displaced persons.
“Those that are badly injured are hospitalized in various medical centers in Jos, with their families left to struggle with the hospital bills.
“Stefanos Foundation’s Need Assessment team of six personnel, led by Mr. Abraham Hassan (the Administrator) in the company of Mr. Franco Majok and
Mr. Joel Vandaspek from Christian Solidarity International (CSI) USA, who were in the country for a visit at the time also visited one of the IDP refuge locations at COCIN Church, Heipang.
“The representatives from CSI and Stefanos foundation spent some time talking with the victims to understand their stories; they also prayed with them.
“The team was able to provide a token of cash gift to support the victims in the interim for their feeding. Stefanos Foundation and CSI plan to mobilize more support in the shortest possible time in order to assist these victims.
“At the time of this report, our Fact Finding team observed that the affected areas were still vulnerable and insecure.
“According to them, there were only skeletal presence of security personnel in locations where the IDPs are situated, and attacks on villages are still silently on-going.
“They also gathered that some of the communities attacked in the past have now been occupied by Fulani herdsmen, and from their records, over 40 villages have now been completely deserted in Barkin Ladi and Riyom LGAs as a result of the continuous attacks.
“The locals, who are the inhabitants of these communities have no hope of returning to their homes, rather, new houses belonging to the Fulanis are now sighted to be springing up in the deserted communities.
“Stefanos Foundation observed that this renewed incident of attacks might continue in the same manner if nothing is done to secure the villages, and if so, as the people lamented, they will have no home to return to”.
Lalong spoke when he received in audience Mr.David Young, the U.S. Deputy Chief of Mission in Nigeria, who paid him a courtesy call in Government House Little Rayfield,Jos.
Governor Lalong thanked the United States Embassy in Nigeria for collobrating with the Plateau State Peace Building Agency to hold a stakeholders parley in the troubled zone.
He assured that the State Government would ensure that perpetrators of the recent mayhem are brought to book according to the law.
Ealier Mr. Young had commended Gov Lalong for nipping the unfortunate distruction of lives and property in the bud. This, he said, minimised the casualty in course of the crisis.
The Deputy Chief of Mission also called for purnishment on those arrested in connection with the killings and insisted that they must be made to face the music.
He said the U S embassy valued her partnership with the Plateau State government.
Meantime, the Stefanos Foundation called for prayers for the chaos in different States of the Country so that there will be
lasting peace and progress in Nigeria.
It called for further prayers for the victims that their faith will not fail despite the overwhelming persecutions they encounter daily adding that the government needed prayers to rise to the challenge of the
need of the victims and bring about justice.
It urged prayerd for victims that God will give them the fortitude to bear their losses and find the right help they need at this challenging
moment of their lives.