The long list of presidential aspirants will grow Thursday when former Information Minister, Professor Jerry Gana, of the Social Democratic Party (SDP) joins the race. Many more are expected to join in the coming days.
Among those already in the race for 2019 are President Muhammadu Buhari, former Vice President Atiku Abubakar, former Kaduna Governor, Senator Ahmed Makarfi; former Central Bank Deputy Governor, Kingsley Moghalu; and former Cross River Governor, Donald Duke.
Others touted to be considering the move are former Plateau Governor, Senator Jonah Jang; Governor Aminu Tambuwal of Sokoto State; former Kano Governor Senator Rabiu Musa Kwankwaso. A former Senate President has also been touted, just like Senate President Bukola Saraki, but he and his aides remained have silent on the speculations.
How to marry the presidential desires in the light of Monday’s political coalition among the Peoples Democratic Party (PDP), a faction of the All Progressives Congres (R-APC), SDP,  Labour Party (LP), it was gathered, is the headache of the alliance.
In the APC, it is almost a fait accompli for Buhari, where no one seems to be rearing his head, though a wing of the faction there may yet spring a surprise, at least to show presence.
But three prominent names and former Generals: Olusegun Obasanjo, Ibrahim Babangida, and Theophillus Yakubu Danjuma are featured power brokers involved in the political calculation to pick a strong contender to the office held on to now by Buhari.
It has been speculated that the generals may throw up a ‘dark, unblemished horse’ or ride the tide separately with each of their preferrred candidates; or as other political pundits project, the ‘hand of God’ will prevail.
Meanwhile, the G19 Campaign Organisation pushing Gana’s presidential ambition, in a statement Thursday said: “We are convinced that our beloved nation at this time needs a genuinely progressive, productive and patriotic citizen, to birth a nation where equity, liberty, justice, and observance of the rule of law prevail.
“Further strengthened by a competent leadership with requisite political will and experience to Restructure the federation, Reconcile the people, Raise the socio-economic fortunes of the nation, and Reposition Nigeria in the comity of nations.
“After due consultations with family, constituents, elder statesmen, stakeholders and associates across the Country, arrangements have been concluded for Professor Jerry Gana CON, PhD, DD, FSSAN, FNIPR, to notify the Social Democratic Party (SDP) of his intention to contest the Presidential election 2019
“Arising from our determination to work together to ensure the emergence of a new, credible and stable political order, designed to deepen democracy, deliver good governance, and produce genuine development, rooted in social justice, peace and security, the G19 Campaign Organisation wishes to announce that Professor Jerry Gana will lead a team of the people to the National Secretariat of The Social Democratic Party (SDP) on Thursday, 12 July 2018 by 10 a.m in this regard.” 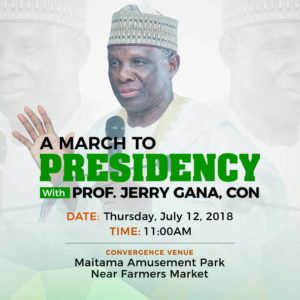