By Laolu Akande, Senior Special Assistant 66to the President on Media & Publicity,, Office of the Vice President. (Photos: Novo Isioro).
*FG promises protection of intellectual property, investment
For two days, American investors and chieftains from the technology and entertainment sectors of the US and indeed global economies took turns to listen and actively interact with Vice President Yemi Osinbajo, SAN, and the Nigerian delegation drawn from the public and private sectors.
They came in impressive numbers for two full days to listen and assess investment opportunities in Nigeria and also asked questions.
From the Silicon Valley for instance, well over twenty core American investors in technology spent over hours on Monday afternoon interacting with the Nigerian delegation led by the Vice President alongside others including Industry, Trade & Investment Minister Dr Okey Enelamah, on how to invest in Nigeria. 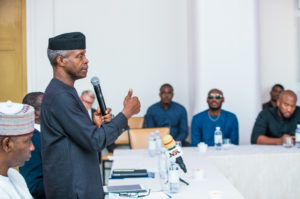 Top among the US investors were Tim Kendall, a US investor who worked with Facebook monetization and has led PINTEREST, headquartered in San Francisco and valued at about $12B. Pinterest is a “web and mobile application company that operates a software system designed to discover information on the World Wide Web, mainly using images and on a shorter scale, GIFs and videos. Pinterest has reached 200 million monthly active users as of September 2017.”
Others who attended the investment summit in Silicon Valley included representatives of StreetEdge Capital, a Bay Area, California multi-billion dollar family partnership with global footprints including holdings in the US, India and Africa. There were also others including Chika Nwobi and Tom Terbell, partners from Rise Capital, “a private equity firm specializing in early venture and later stage investments. It seeks to invest in the internet enabled sector in emerging markets.” The multi-million dollar investment firm is also based in San Francisco, California.
In the same vein, Prof. Osinbajo also visited the headquarters of LinkedIn where he held a meeting with the Co-founder of LinkedIn, Allen Blue, and other senior executives of the company at its headquarters in California.
The Vice President later also featured as the Special Guest at the firm’s Fireside Chat with a packed full room of Nigerians in Diaspora, which was also streamed live to a global audience.
The next day in Los Angeles, right in Hollywood, the Vice President and his delegation, drawn mainly from the Advisory Group on Technology Innovation and Creativity, an arm of the National Industrial Competitiveness Council, also met with an impressive array of entertainment chieftains and investors in the US.
They included top Hollywood executives like Mark Viane of Paramount Pictures; Steven O’Dell of Sony Pictures; Kieran Breen, Karen Mbanefo and Bryan Song of 20th Century Fox, Betty Lee of Lions Gate; Craig Dehmel and Shehu Garba from IMAX Entertainment; Monique Esclavissat of Warner Bros; Mary Ann Hughes from Walt Disney, John Fithian from the National Association of Theater Owners, and Ryan Gibson of BET International, among others. There were also representatives from Fox Network, 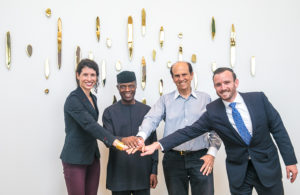 Also at the forum from the Nigerian delegation were renowned names in the film, music & entertainment industry, including Innocent Idibia, popularly known as Tuface; New York-based Nigerian visual artist, musician, singer/songwriter, Laolu Senbanjo; CEO, Ebony Life TV, Mo Abudu, Chocolate City CEO, Audu Maikori; founder/CEO Terra Kulture, Bolanle Austen-Peters; New York artist, Sesan Ogunro among others.
It would be recalled that the Vice President on Monday was received by Google CEO Sundar Pichai and other top Google executives at the global technology company’s corporate headquarters in Silicon Valley, California.
After the meeting in Silicon Valley, the Vice President also interacted with scores of Nigerians working with Google.
Speaking in Hollywood before he left the US early yesterday, Prof. Osinbajo noted that the Federal Government is determined to ensure needed regulations to stimulate the growth of the country’s entertainment and creative industries, including the protection of Intellectual Property and investment guarantees.
The VP stated this during the interactive investment forum on Nigeria’s creativity sector with US-based entertainment outlets, media & investors held in Waldorf Astoria, Beverly Hills, Los Angeles, all day Tuesday.
According to the Vice President, “we understand how dynamic the environment is, both technology and creative arts. But we think that the way to go will be to work with those who are actually in the industry, those like yourselves who are putting in their money, their resources, time, and energy into this, and trying to do our regulations in such a way that we are competitive practically with anyone else in the world. 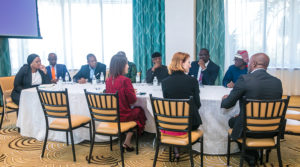 “So what we have done so far is that we’ve been looking at what the specific issues are, and there are quite a few. There are those who want to know about what we are doing in terms of Intellectual Property protection, investment guarantee, and all of that. But I think that the most important thing really, is that we have a government and a lot of those who work in our agencies, who are determined to work through this, day by day, piece by piece to make sure that we get our environment right, and we get the right type of investment environment.”
Prof. Osinbajo further said the Buhari administration will continue to make effort to improve the country’s infrastructure and technology to grow the country’s entertainment/creative sector and the digital economy.
He said, “we are also, of course, very interested in many ways, in deepening infrastructure, especially broadband, connectivity and all of that, because we think that mobile telephony is going to be one of the big ways, especially for the distribution of film and all of that. And we are convinced that with the size of our population, we must find ways of getting film and content unto mobile phones, and also working out payment systems around that because we think that that is the way this is going to go.
“We know that in the next couple of years, that really is where a lot of development is going to go to, and we are very anxious to get our regulations right, to get all of our laws in place and to ensure that we are able to attract all of you who want to do business with us, especially those of you who are coming from other countries. As for the Nigerians, we are, of course, actively engaged with the local industry, and that is one of the reasons why we have the advisory council which takes into account many of our local investors, local artistes and the local entertainment crowd generally.”
The interactive forum in Los Angeles was the last leg of the Vice President’s trip to the United States where he led a Public-Private sector collaborative investment road show, including meetings with global industry leaders in the technology, film, music & entertainment industry in San Francisco and Los Angeles respectively.
The investment road show led by the Vice President showcased the efforts of the Buhari administration in developing Nigeria’s technology, entertainment and creative sectors; and sought to deepen collaboration between Nigeria and the US in these areas.
Also on the Vice President’s delegation were representatives of tech firms, Nollywood and several relevant government agencies.
His earlier meetings with a series of key US technology investors, executives from US-based companies at the “Invest in Nigeria Summit”, was held at the Four Seasons Hotel, Palo Alto, San Francisco, California, while the meeting with Hollywood and US entertainment industry operatives was at the Waldorf Astoria Hotel in Los Angeles.
At the meetings which were well attended by US and Nigerian investors/industry chieftains, Prof. Osinbajo reiterated Government’s commitment to the growth of the country’s digital economy by creating the right environment for the technology, creative industries to thrive and unlocking the country’s potential.
The Vice President said, “One of the critical things for us also, is the fact that we are very open to ensuring that regulation is competitive, especially in the Tech space. All over the world, this is a very dynamic environment, and we recognise that, and we want to be able to work with players and investors, to get the regulations and environment right.”
Prof. Osinbajo also showcased opportunities for innovation and investment in Nigeria, while also highlighting the growth of Nigerian technology start-ups and young Nigerians taking the lead in innovation and creativity.
He noted that Government was exploring more ways to leverage on technology to improve infrastructure and other areas of the economy, while also highlighting the impact of the Buhari administration Social Investment Programme such as the N-power scheme and how it leverages on technology to train and empower young Nigerian graduates. So far the N-Power scheme has 200,000 beneficiaries, with 300,000 more expected to be added soon.