By www.africanexaminer.com
…Says “We Didn’t Discuss  Items Inserted Into the Budget”
Senator Abdullahi Adamu, (APC-Nasarawa-West), has taken a swipe at his colleagues over the 2018 budget padding accusations made recently by President Muhammadu Buhari.
The president, who said he reluctantly signed the 2018 budget into law, accused the lawmakers of padding the budget by inserting items and projects not originally conceived by him.
Reacting to the budget crisis in an exclusive interview with AFRICAN EXAMINER in Abuja, Senator Adamu accused some of his colleagues of inserting those contentious provisions and items without bringing it the floor of the Senate for discussions. 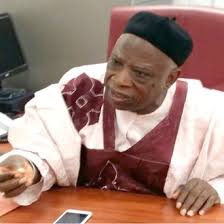 His words:
“I take very seriously the observation of the president about the allegation of what was done to his proposal. In specific terms, he mentioned them, he didn’t make a sweeping statement of the budget that were inappropriately altered from his proposal and the way and manner the committee ended up with some projects that were not conceived by the president in the proposal and went ahead to pass them on the floor.
“I was in the Senate the day the budget was passed, the issue is not really the items in the budget that were in contention but the devil in that budget is in the details. We were not given the details, which encompass the alterations that were entered and the fact that they were not put before us properly in accordance with our procedure amounted to some kind of illegal act because there is some element of some abuse of trust. If we get the details, no one will raise objection because the principle of collective responsibility would have taken a better side of us”.
Senator Adamu challenged the Senate to make all the alterations public adding that it is important for Nigerians to know what projects amounted to the huge increase in the appropriation.
His words:
“The alterations cannot be buried because the president will not make allegations in vain. What I will suggest, is that the details of all these inclusions must be made public, what projects amounted to the increase of the amount the president proposed.
“The spokesman of the Senate has said what they did was to ensure that the spread of project reflect federal character. I believe that yes while we can share the emotions and sentiments of federal character, the fact is that president is an elected person, to ensure that we owe the president a duty of confidence, duty of good faith, is to reach out to him and may be some people in the budget office so we could discuss, they didn’t do so.
“How do you try to ensure Federal character and then took part of allocation for the Niger bridge which links southeast, south south to mainstream Nigeria by road.
“What the president proposed was slashed. When did they discuss these slashes and which date did they discuss this? Where is the record of the proceeding for that day?. They took some money from Enugu airport, which is under rehabilitation, about N5b was proposed but reduced to about N2.5b, when did we discuss this? As a matter of fact we didn’t discuss the details of these alterations, and I insist that if they say we discussed it, let them bring the records of proceedings for those particular days because if there is anything, they deliberately delayed the budget because it took 200 days to finish the budget and I asked what are they doing?
“The president alleged that in order to take care of the security demand of the education institution  because of the threat of terrorists in girls school, the executive brought a proposal on how to protect the infrastructure in this kind of institutions, now how do you justify these things. And there are quite other items like railway, the Lagos-Ibadan expressway. Now what have they brought from the money they deducted. Let us see the allocation and what projects have they brought in.
“I don’t think there is any good excuse to have held the budget for 200 days. And having done all that, they wreaked so much havoc to the budget proposal on the basis that we have constitutional powers duties to do it. Yes, nobody is denying that there is provision of our constitutional powers  but all of us, 109 of our constituencies together constituted the president’s constituency; he was elected, just as we were elected. Democratic courtesy, constitutional courtesy demand that we sit with the president or his agents, operators to discuss it amicably and resolve it.
“Now we have to grandstand as if your constituency is equal to the president’s constituency, even the entire Senate, I said it without apology to anybody, any constitutional lawyer can come and I challenge them to say we have the same powers with the president, it’s a lie and fallacy. We are only one arm of the three arms which the president is the chief executive officer.
“They know something is wrong with what they are doing but this grandstanding and taking cover behind the veil of the National Assembly and do things that we should not be doing and just creating confusion and hope to gain sympathy and take cover with the National Assembly and pretend there is a misunderstanding between national assembly and the president”.