Vociferous Governor of Kaduna State, Mallam Nair el Rufai, is shooting at Nigeria’s Senate on all cylinders describing this eighth one header by Dr. Bukola Saraki as the worst ever.
el Rufai has never hidden his disdain for federal lawmakers from his days as a Minister of the Federal Capital Territory when he was under the shadow of the protective wings of former President Olusegun Obasanjo.
Recently, he had a spat with House Speaker Yakubu Dogara, and the Senators from his State, on whom he poured invectives and rained curses on, forcing many to accuse him of hate speeches.
Speaking in a radio interview el-rufai repeated an often quoted allegation that many present office holders, including himself, used the waning Buhari franchise to get into power.
His words: “We have never had a bad Senate leadership like this one by Bukola Saraki. Some people whose names were mentioned among those who decamped said they never authorised it. 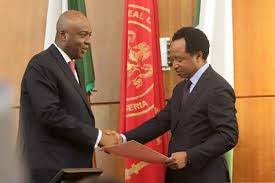 “We know those who cannot win elections in their homes. Many of them found themselves in the National Assembly by riding on the back of Buhari. Some of them won the election because presidential and parliamentary elections held on the same day.
“We initiated many projects this year because the World Bank approved a loan of $350 million to us and we were sure that we will get some part of the money this year.
“We included it in our budget to be able to execute our projects – schools, hospitals and the roads that we are constructing in the town. Well, you know what happened. The House of Representatives approved the loan but the Senate rejected it. When it was presented to the Senate, our Senators from Kaduna kicked against it.
“They said the loan should not be granted. I was told that they ( the three senators) held a meeting and they said if Kaduna state government is given the loan, one of them will not realise the ambition of becoming governor.
“The betrayal of Kaduna people by Shehu Sani, Suleiman Hunkuyi and Danjuma Laah is the reason why many projects have stopped. So, I want the people to understand this. Anywhere you see that a road project has stopped, ask them. Anywhere you see that a hospital project has stopped, ask them. Anywhere you see that the construction of a school has stopped, ask them.
“Anywhere you see that a project that is meant to benefit the people has stopped, ask these three people that betrayed the state. Whichever part they go, use your votes against them.”

As a father, what is your job description?

I never opposed Ortom on PDP crises, says Senator Abba Moro
NOA / ILO in partnership to end child labour in Nigeria
ICPC confirms arrest of D’Banj over N-Power funds fraud
We will never be good Muslims or Christians if we do not embrace, respect and honour one another and our faiths